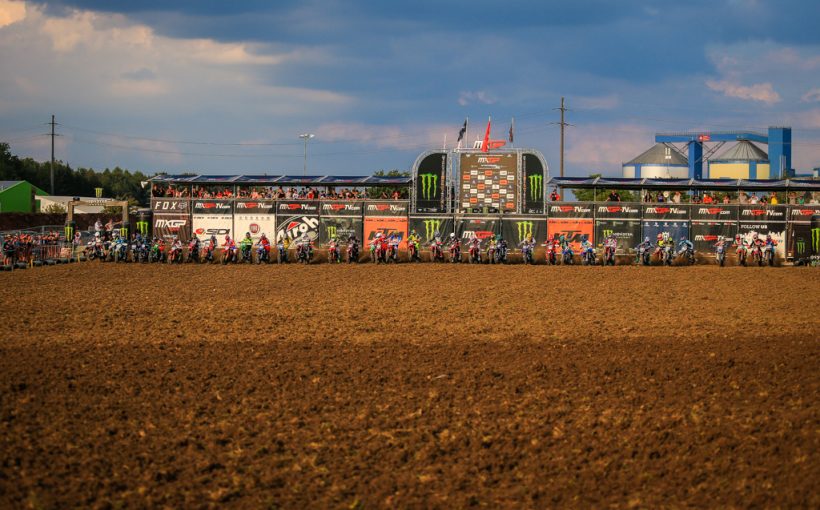 Played out over 2 days the EMX racing started with Time Practice and Last Chance Races to narrow the fields down to 40 riders each. Following the Qualifying was the first points paying races on Saturday starting with first with EMX125 presented by FMF Racing Race 1 immediately by EMX250 Race 1.

In EMX250 the race was first led by the round 1 winner in RedSand, Spain, BUD Racing Monster Energy’s Pierre Goupillon. Goupillon quickly lost the lead to Team DIGA-Procross’ Dylan Walsh and the lost another spot to Honda RedMoto Assomotor’s Mathys Boisrame.

Walsh dealt with pressure from the red plate holder Boisrame on his Honda but the #172 fell on lap 2. Goupillon was back into 2nd but his BUD Racing Monster Energy Teammate Brian Moreau took the spot on lap 8.

REVO Husqvarna UK’s Mel Pocock was in 3rd for 3 laps after starting 4th but then dropped back 9th to finish the race. Michael Sander was in 4th until the last lap when he was passed by both Boisrame and Yamaha SM Action MC Migliori’s Maxime Renaux.

At the finish line Walsh scored the race win with Moreau 2nd, Goupillon 3rd, Boisrame 4th, and Renaux rounded out the top 5.

Today’s Race 2 started well for Mathys Boisrame who found himself in the lead by the end of the first official lap. Race 1’s winner Dylan Walsh was second for the first 3 laps recorded before Apico Factory Racing Honda’s Steven Clarke took the spot.

WZ-Racing’s Jeremy Sydow was 4th before Josh Spinks took the position away on the same lap that Clarke took second from Walsh. Spinks also took a position from Walsh along with several other riders.

Moreau started the second official lap in 12th after his 2nd in Race 1. Moreau struggled to keep his bike upright and on two wheels falling multiple times throughout the race by miraculously managed to score a 7th.

The race was won by Boisrame who also took the overall while Clarke and Moreau rounded out the podium.

Mathys Boisrame: “I am very happy with how the weekend went. Yesterday I was fast, but I made some mistakes which I think cost me the chance of a win, however today I rode really well and got the race win and overall and extended my lead in the championship to 18 points.”

The penultimate round of the 125cc racing provided Yamaha Europe EMX125’s Thibault Benistant with the possibility to take the title via double race wins. However Benistant’s teammate Rick Elzinga returned from injury this weekend and offered no favors to his teammate.

Motoblouz HB Racing’s Florian Miot led the first 2 laps on Saturday before Elzinga took the lead from the Frenchman. RD10’s Raivo Dankers was the next to lead shortly but lost the spot to Team VRT’s Tom Guyon. Guyon held the lead longer than anyone and more importantly all the way to the finish.

Dankers dropped another pair of positions before the race was over to finish 4th while Elzinga took second and Team Maddi Racing Husqvarna’s Mattia Guadagnini scored 3rd. Red plate holder Benistant came away with 5th after starting in 3rd.

Race 2 was the first event on track this morning and the freshly water conditions were massively different than those of the afternoon prior. Regardless, Guyon was again strong and started the race in the lead which he held for the first 4 laps before Guadagnini surged past.

Running in 3rd the entire race F4E Racing’s Kjell Verbruggen from the Netherlands in his best ride of the season. Elzinga started the race 5th but moved to 4th with the other F4E Racing rider of Mario Lucas Sanz 5th.

At the finish it was a race win from Guadagnini over Guyon and Verbruggen but in the overall win went to Guyon for the first time in his career with 1-2 scores, while Guadagnini took 2nd with 3-1 results, and Elzinga rounded out the podium with a 2nd and a 4th.

Tom Guyon: “I’m really happy with my weekend, it’s my first race win and my first podium, I am now hoping for another podium in Assen.”