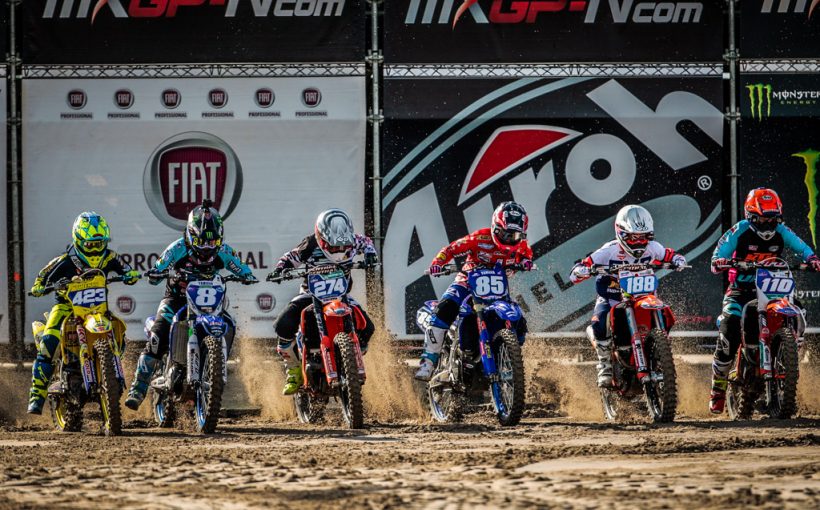 The women of motocross made the trip to Assen this weekend for the penultimate round of the 2018 FIM Women’s Motocross World Championship. Just as the MXGP and MX2 World Championships are finishing out the season with the final two rounds of the Netherlands and Italy so are the women. Taking her first overall victory of the 2018 season via double race wins today was MXFONTA Yamaha’s Kiara Fontanesi.

In the days prior to the event Yamaha announced that the Red Plate holder Courtney Duncan from the Altherm Yamaha JCR team would miss the remainder of the championship with injury. While the news was not what anyone wanted to hear, it did give a new outlook to the championship.

Race 1 took place Saturday morning and tested each of the riders on track with the rough and sandy conditions. The early lead went to Germany’s Larissa Papenmeier with Stephanie Laier 2nd and Fontanesi 3rd.

Fontanesi quickly got by Laier and then took over the lead from Papenmeier after the German fell on lap 5. Papenmeier got back up in 9th and worked her way forward to 6th by the finish. Fontanesi managed to ride a crash free race and take the win after struggling here the past several years. Taking second was Laier as Nancy van de Ven took 3rd in front of her home crowd.

Race 2 was again led by Papenmier off of the start with KTM Silver Action’s Amandine Verstappen in second, Laier 3rd, and Fontanesi chasing the group in 4th. Papenmeier’s strong start and lead was under pressure from the hard charging Verstappen.

Papenmeier held off the Belgian at first but then both her and Verstappen were passed by Fontanesi at the end of the finish straight. 2 laps later Papenmeier fell and again dropped a hand full of spots for the second day in a row.

Taking over second was Van de ven after passing Verstappen on the same lap. Fontanesi was too far ahead though. The #8 took the win while 2nd in the race and overall was Nancy van de Ven as Verstappen took third in the race and 4th overall leaving the final overall podium spot to Laier.

Fontanesi’s strong finish and consistent weekend allowed her to not only claim the win and overall but also the championship leaders red plate before heading into her home round and season finale at Imola in 2-week time.