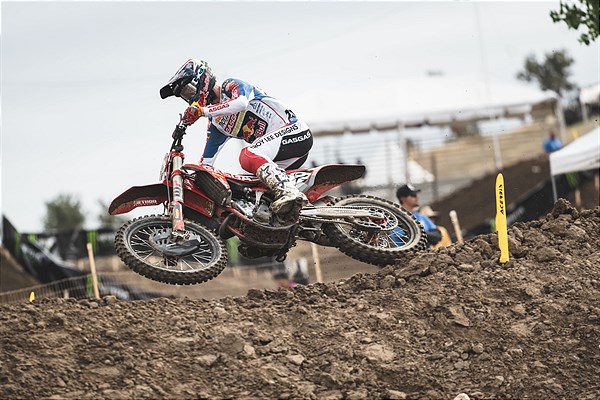 The Troy Lee Designs/Red Bull/GASGAS Factory Racing Team headed up the California coast for Round 2 of the 2022 AMA Pro Motocross Championship, where local Michael Mosiman scored his first-career moto-win in front of a hometown crowd at the Hangtown Motocross National. A heartbreaking crash brought an early end to his second moto but the NorCal native has plenty to be proud of after riding the wheels off his MC 250F all day!

Coming off a top-five overall at the opening round, Mosiman was on a mission toward podium success and he kicked things off as fourth fastest in the 250MX division. With a great third-place start in Moto 1, Mosiman patiently waited for the opportunity to overtake the lead and he made his move just before the midway point. From there, it was smooth sailing to the finish with a three-second victory in the first race. He put himself into another favorable start in Moto 2, battling from the top-five into podium contention before suffering a hard crash early on. Attempting to re-mount and continue racing, Mosiman pulled into the mechanic’s area but it the bars were bent beyond repair, forcing a heartbreaking ending to Mosiman’s epic day.

Michael Mosiman: “Wow, what a day it was! Huge shoutout to the team, they put in the work this week and got my bike feeling sweet. I felt good in qualifying, I felt good in the first moto and even the second moto. Riding the wave with the fans, it was really cool. I was stoked to be able to get my first moto-win here at Hangtown. All-in-all, I’m stoked. I’m even proud of putting myself into a good position for the second one. It’s not easy to follow that up and to be in fourth-place early on is a really good position for me but unfortunately, I went down and bent the bike up, and bent my body up a bit, but we’ll be back stronger for Thunder Valley.”

For Pierce Brown, Round 2 was a bit challenging when it came to starts and he found himself playing catchup from behind in both motos. Off the line 20th in Moto 1, Brown rallied through the field early on to get up to 14th but he went down and ultimately wasn’t able to finish the moto. Banged up and bruised, Brown got after it again in Moto 2. He started outside the top-10 and immediately went to work climbing from 13th up to 10th halfway through. Holding strong through the end of the race, Brown secured 10th in Moto 2 to salvage some valuable points toward the overall championship.

Pierce Brown:“I’m a little bit sore after today, I had a big get-off in my first moto. I was running mid-pack and just made a mistake and I couldn’t finish. Second moto, I was pretty banged up but we came back and dug through it to salvage a 10th. We’re just going to re-set and get ready for next week.”

In the 450 class, it was a top-10 day for Justin Barcia with 10-11 moto scores. Less-than-ideal starts held him back from putting in an early race charge in both motos, which made it difficult to break into the top-10 battles. Leaving the first California stretch healthy and strong, Barcia looks forward to making a comeback as the series heads to Colorado next weekend.

Justin Barcia:“I struggled a bit all day, just getting to feel one with the bike and one with the track, so that was unfortunate. I had mediocre starts and got tight arms both motos – I just never got my flow – so it was quite disappointing, I’ll be honest. I definitely need to go back to work and figure things out because I don’t love starting the season this way, but I know I’ve been through a lot worse and we’ll overcome any little obstacles we have. So, I’m excited for future and brighter races.”

Next up, the crew will head to Lakewood, Colorado for Round 3 of the 2022 AMA Pro Motocross Championship with the Thunder Valley National.

Championship Standings – After Round 2