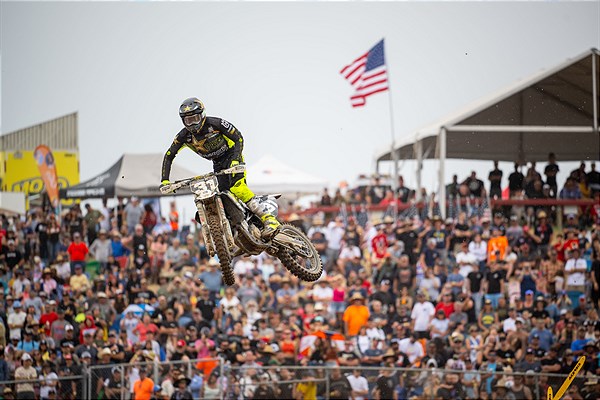 Rockstar Energy Husqvarna Factory Racing’s Stilez Robertson captured a top-10 overall finish at the Hangtown Motocross Classic, delivering consistent 11-7 moto scores in the 250MX division. The second round of the 2022 AMA Pro Motocross Championship proved to be a a challenging day for Rockstar Energy Husqvarna Factory Racing teammates at RJ Hampshire and Jalek Swoll, who both suffered premature endings to their day in Rancho Cordova, California.

Despite the challenges, Robertson was able to keep it steady through both motos of the day. He got a mid-pack start in the first moto, forcing himself to come through the field early on. Halfway into the race, Robertson had worked his way up to 14th and he continued to push late in the race to finish just outside the top-10. In Moto 2, he got off to a top-10 start and he spent most of the race dicing between the seventh and eighth-place positions, ultimately solidifying seventh.

“It started off a little rough, just not feeling where I should be,” Robertson said. “First moto was okay; I came through the pack after a bad start. Watching between motos, we figured out some things to tweak on the bike and we got it set right. It took me a little bit to get going but I finished seventh in the second moto, which is closer to where I want to be. The main goal is two good starts so we’re going to keep building. There’s 21 motos to go.”

Teammate Jalek Swoll bounced back strong in the first moto after a tough opening round last week. He blasted his FC 250 into second off the start of Moto 1, racing at the rear wheel of the leader for the first several laps. Meanwhile, facing intense pressure from Michael Mosiman behind, Swoll managed to hold him off until just under the halfway point before dropping back to fifth. Late in the race, Swoll got cross-rutted and crashed, dropping him back to ninth. With a third-place start in the second moto, Swoll was off to a promising race. However, bad luck soon struck when he crashed within the first lap, leaving him unable to finish the race.

“This was my first time riding this track and I had a really good start in Moto 1,” Swoll said. “I was running top-three for most of the race and my fitness and speed felt good but the crash that I had from Pala kind of just beat me down today. My shoulder wasn’t ready to go but we still showed up and put our best foot forward and it kind of gave up on me in the later stages of the day. Trying to get this thing fully 100 percent for Thunder Valley to do the same things. We’re in a good spot, we just have to keep pushing away.”

After just narrowly missing the overall podium at Round 1, Hampshire came into the weekend looking for redemption in the form of a top-three finish. Fifth in qualifying, Hampshire started off the day strong but he found himself battling just inside the top-10 for most of the first moto. He experienced an issue late in the race, setting him back to a 16th place finish, and later made the decision to not line up for Moto 2.

Fill-in rider Shane McElrath battled through a challenging day in the 450MX class. With a start just outside the top-10 in Moto 1, McElrath shuffled between ninth and 12th over the 16-lap race, ultimately locking in 12th. In the second moto, he raced between 13th and 14th for several laps before settling into 14th for rest of the race.

“It was a pretty tough day today for me,”McElrath said.“I kind of was struggling with the track every time I went out, it was a little bit deceiving, and I was off the pace all day. Every time I was out there, I was battling more with the track than I was with any of the guys around me. I think we still have a lot of room to grow and I think that we’re perfectly capable of doing that. I’m excited to get back to work this week and to continue making progress and rebound next weekend.”