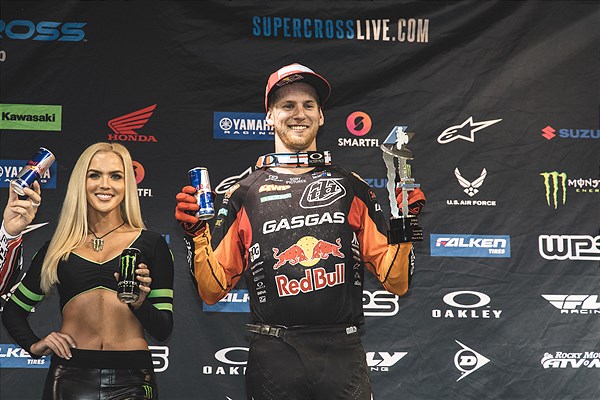 BARCIA TAKES AWAY POSITIVES FROM ROUND 12.

The AMA Supercross Championship returned to the west coast this weekend and after five rounds off, the 250SX West battle got heated in Seattle! Troy Lee Designs/Red Bull/GASGAS Factory Racing’s Michael Mosiman picked up right where he left off, charging his MC 250F to a third-place podium finish despite overcoming a less-than-ideal situation on the track. Teammate Justin Barcia had all the right tools to grab himself another 450SX podium, including a season-best qualifying spot and a heat-race win, but he went down early in the Main Event and still came away with a solid top-five finish on the night.

Mosiman was stoked to get back to racing tonight and it showed right off the bat as he scored the fastest qualifying time of the day, besting all the 250 and 450 riders! Sitting pole for the first time this season, Mosiman found himself struggling to get off the line in his heat race, settling into sixth early on. He moved up to fifth and got into a good rhythm mid-race but he wasn’t able to make any moves, ultimately finishing sixth.

Re-setting for the Main Event, Mosiman grabbed a solid second-place start and pressured the leader for the first couple laps. Sweeping his way into the lead on lap three, the NorCal native tried to put a gap on the rest of the field but he slowly began to lose his edge, along with the use of his rear brake. After five laps out front, Mosiman’s lead was overtaken and he did his best to rally through the remaining laps to secure an impressive podium finish in Washington.

Michael Mosiman: “It’s so good to be back racing! The track was tight and tricky and I was fastest of the 250 and 450 classes, which I was super stoked about! In the main, I made a pass on Christian and ended up bending a rear brake rotor in the process. My bike was riding funny and it would hit the brakes every time the wheel spun and then I didn’t have any brakes after a while. I would have loved to win it but for as crazy as the night was, to end up on the podium was a win for me.”

Qualifying his best of the season in fifth, Barcia had a strong start to the day and he kept the ball rolling into his heat race. Powering his MC 450F to the holeshot, Barcia led all nine laps of the heat to carry a nice gate pick into the Main Event.

With a solid second-place start in the main, Barcia established himself as a front-runner early on. He kept himself in the mix up front for the first half of racing but an OTB crash cost him a good amount of time. Re-mounting in fifth, Barcia did what he needed to manage the rest of the race and ultimately salvaged a hard-fought fifth on the night.

Justin Barcia:“It felt awesome to win the heat race – the bike was ripping! We made a few changes for the Main Event and got a second-place start. Me and Eli checked out, running a good pace and I just got a little off the line, landed on a tuf block and went flipping. I’m super disappointed in that but I was riding my heart out and ended up fifth. My bike was already torn up after that crash and I managed the race as good as I could. All-in-all, I’m just happy with the positives on the day. It’s a bummer on the crash but we’ll be back in St. Louis to go for the win.”

The Troy Lee Designs/Red Bull/GASGAS Factory Racing Team is stoked to enjoy a weekend off from racing before getting back after it on April 9 in St. Louis, Missouri.

Championship Standings – After Round 12