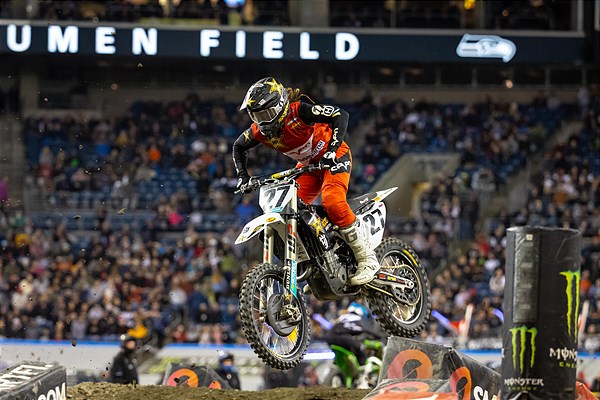 Rockstar Energy Husqvarna Factory Racing’s Malcolm Stewart finished just outside the 450SX podium with a solid performance at Round 12 of the AMA Supercross Championship in Seattle, Washington. With five rounds remaining, Stewart sits a mere six points away from second overall in the championship standings as he continues to fight for his first win in 2022.

Lining up in pole position for the fourth time this season, Stewart rolled into 450SX Heat 2 with high confidence and he captured the holeshot and early lead. He held onto the top spot for a majority of the race before engaging in an intense three-way battle during the final two laps. Stewart held his own in second going into the final lap but he ultimately finished third.

In the Main Event, Stewart got off the line in sixth and quickly made his way into a top-five position. Maintaining a solid pace, he climbed into fourth and put a late-race charge on Marvin Musquin for the final podium position coming into the last lap of racing. Despite all efforts, Stewart wasn’t able to make anything stick and he finished just outside the podium with a hard-fought fourth-place.

“I felt good all day,” Stewart said. “I didn’t get the best start in the Main Event and I was sitting in fourth and Marvin was right there for third, so the last lap I tried to make a little pass and one of the lapped riders ended up going inside and kind of screwed me up and I went down. Overall, I felt good, I just wasn’t fast enough to get on the podium tonight. I’m glad we ended on a better note than last weekend, so we’re going to take what we learned and go from there.”

Dean Wilson, the sixth-place qualifier, grabbed a top-10 start in 450SX Heat 1 and he charged his way through the pack to reach the top-five a few laps in. From there, Wilson rode a strong race to secure a fifth-place transfer. In the Main Event, Wilson shot off the line to capture a top-five start and he battled around fifth for the first half of racing. He got shuffled back a couple spots later in the race but he maintained a good pace to match his season-best finish of seventh in the Main Event.

„My riding was pretty good for the most part,” Wilson said. “In the main, I was in the top-five mix for a few laps, which was cool. I wasn’t too far away from top-five at the end but my arms got really tight in the last few minutes, just lack of good lines and flow on the track. It’s frustrating but I did some things well and I just have to learn from that and ride like I know how to and I can definitely be in that top-five.”

The 250SX Western division returned this round after five weeks off from racing. Team rider Jalek Swoll had a great start to the night as he powered his way to a second-place start in 250SX Heat 1. Racing up front on the opening lap, Swoll made a mistake that dropped him back to seventh early on but he kept his focus ahead to climb back to a sixth-place finish in the heat. In the Main Event, Swoll didn’t get the best start as he rounded the first lap in 15th. He worked his way into the top-10 within the first five laps and he continued to push as far up as eighth before the checkered flag flew.

“It was a tough one, I feel like it could have been a better night if I had a better start,” Swoll said. “I got into the back of the pack, somewhere around last, and could only make it up to eighth. It’s frustrating, so I’m going to go back to the practice track, put in some work on my starts and come back after the break and be better.”

Next Round: April 9 – St. Louis, Missouri