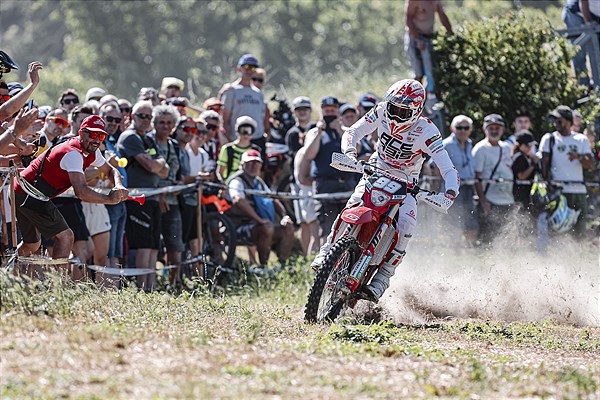 ANDREA VERONA GIVES HOME CROWD SOMETHING TO SHOUT ABOUT WITH STUNNING DOUBLE E1 WIN IN ITALY!

GASGAS Factory Racing’s Andrea Verona has dominated the Enduro1 class on both days of racing at a super-hot and dusty GP of Italy! Aiming to impress his legions of loyal fans, Andrea’s double E1 class victory certainly hit the spot, as did his impressive day two speed, which saw him narrowly miss out on securing the overall EnduroGP class victory by just 16 seconds. Now, with an extended Enduro1 championship lead and once again showing that he’s one of the top dogs in EnduroGP, Verona is already focused on returning to battle next weekend, at round four in Portugal.

With an enthusiastic crowd on hand to witness the Friday night Super Test at the GP of Italy, and with Andrea determined to put on a show, the Italian ace did exactly that! Never giving less than 100% as always, the EC 250F racer stayed on the gas and between the tapes to complete the test less than half a second from the E1 class victory.

Winning all but one of the 12 special tests in the Enduro1 class on day one (Saturday) was a clear indicator of Verona’s form in Italy as he charged to his fifth straight day win in E1. That same speed carried over into the overall EnduroGP class where he placed an impressive third to maintain his perfect podium record in the combined division while well and truly underlining a successful opening day of racing.

Focused on improving his flow on day two, Andrea was eager to end his home GP on a high. Setting a blistering pace from the opening special test onwards, the 23-year-old enjoyed a near perfect run throughout the day to claim E1 victory and continue with his perfect season. Over in EnduroGP, Verona’s intentions were evident as he battled eventual winner, Wil Ruprecht, for the win and secured a strong runner-up finish. Andrea now lies second in the EnduroGP class standings.

As the dust settles in Italy, Andrea and GASGAS Factory Racing will now head west to Portugal for the fourth round of the 2022 FIM EnduroGP World Championship on July 1-2.

Andrea Verona:“As always, my home GP was amazing, and it was incredible to see each test lined with fans cheering for me. It’s a shame that I couldn’t quite get the win in EnduroGP but I gave it everything I had. I won both days in E1, so I’m happy. On day one I was a little slow to get into it so for day two I really focused on my flow and it paid off. I ended up second, just 16 seconds from the win, so it was a big improvement. It’s now onto Portugal where the goal is to continue with my form from day two here and challenge for another victory in EnduroGP.”