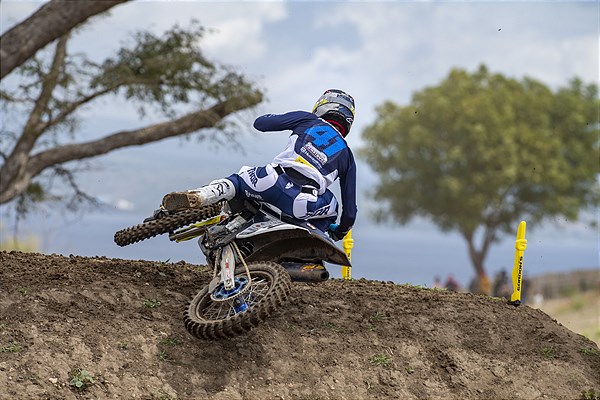 The Husqvarna Factory Racing stars made the lengthy trip across the globe to Samota-Sumbawa, Indonesia, for round twelve of the 2022 FIM Motocross World Championship. The spectacular circuit, which had never been raced on before, played host to thousands of fans who were excited to see Pauls Jonass, Brian Bogers and Kay de Wolf in action.

Pauls Jonass had the speed to fight for a position on the Grand Prix podium, but a minor error in moto one cost him dearly. Jonass was running in fifth quite comfortably in the early stages and desperately trying to make progress, when a misstep in a turn caused him to drop to ninth. ’41‘ ultimately recovered to seventh. The second moto was eerily similar to the first – Jonass was fighting hard inside of the top five to start with and looked good as he diced with the frontrunners. Unfortunately, an error meant that he was forced to settle for another seventh place. 7-7 scores put him in seventh overall.

Desperately trying to salvage some points, after picking up an illness at the beginning of the weekend, Brian Bogers put in a valiant effort to claim fifteenth in moto one and six valuable points. Bogers showed a lot of heart by returning to the start line for moto two, but could only salvage sixteenth. Sixteenth was his overall ranking too – eleven points were gained at the Grand Prix of Indonesia.

Kay de Wolf claimed a respectable number of points on Indonesian soil, despite battling a sickness on race day. De Wolf actually showed more of that incredible pace aboard his FC 250; he was a clear contender for a spot on the podium in moto one. ’74‘ ran as high as second place in that moto, but fell a couple of times and had to ultimately settle for eighth at the chequered flag. After giving it his all in that moto, in such tough conditions,

There is a break in the 2022 FIM Motocross World Championship schedule now. The next round, the Grand Prix of Czech Republic, will be run at the old-school circuit of Loket on July 17.

Pauls Jonass: „The speed was good at the beginning of the day and it is kind of the same old story. I just struggled a little as the track got rougher. The speed was really good and so was the feeling on my FC 450, but I was just missing something. I had small crashes in both motos too – that didn’t help after some great starts! The good thing is that the speed is there.“

Brian Bogers: „This weekend was a complete disaster. I got food poisoning, so we knew that it would be tough. We just did what we could to salvage some points today. We will get healthy and try to bounce back at the next round with some good results, because I can do better than this.“