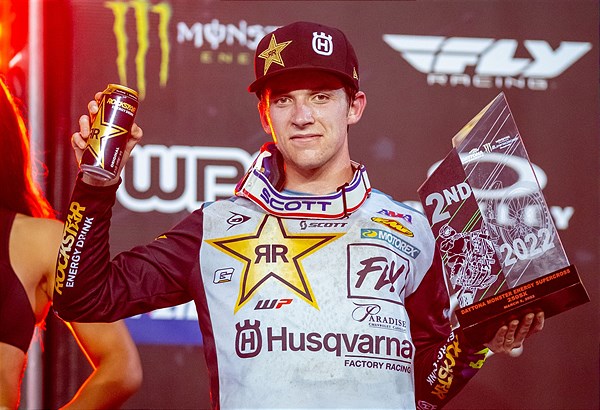 Rockstar Energy Husqvarna Factory Racing’s Stilez Robertson delivered his first podium result of the season on Saturday with an impressive performance in front of a packed crowd at the iconic Daytona International Speedway. Only three rounds into the 250SX Eastern series, the Daytona SX served as Round 9 of the AMA Supercross Championship, where teammates Malcolm Stewart and Dean Wilson claimed a pair of top-10 finishes in the 450SX division.

With plenty of experience on the Daytona Supercross track as an amateur, Robertson came into the weekend with high confidence and he proved to be strong from the start with a top-five position in the day’s qualifying and he launched off the line to secure the holeshot in 250SX Heat 2. Holding off the series points leader until lap three, Robertson went on to claim a season-best second in the heat.

Robertson was quick off the line once again to secure his second holeshot of the night in the Main Event. Immediately settling into second on the opening lap, he upheld his momentum lap-after-lap to secure a second-career podium at Daytona, an exceptional feat after recently recovering from a shoulder separation and broken pelvis during the off-season. Three rounds in, Robertson now sits third overall in the 250SX Eastern Championship standings.

“After the heat race, I came back and talked to the team and they really had my back and gave me some good motivation for the Main Event,”Robertson said.“I got a good start and Jett [Lawrence] got me through the first turn and I just tried to stay with him as long as I could and ended up really good. I’m super excited and can’t wait to keep it going!”

Team rider RJ Hampshire came into the weekend feeling under the weather but he managed to salvage valuable points with a top-10 finish in his home state of Florida. The second-place qualifier got off to a great start in 250SX Heat 1, capturing the holeshot and assuming the lead on lap one. Facing pressure from behind, Hampshire swapped positions early on before pulling out to a comfortable lead and securing his second heat-win of the season.

In the Main Event, Hampshire grabbed a top-five start and he battled up front until an early crash shuffled him back to eighth on lap three. He bounced around between seventh and eighth for the next few laps and just after the halfway point, he made a big charge up to fourth. Challenging for a podium position, Hampshire made a mistake and stalled the bike, which put him back to eighth with three laps to go. In the end, Hampshire was able to claw his way back to seventh.

In the 450SX class, Malcolm Stewart came out swinging and immediately set the tone for what appeared to be a top day in Daytona. The Florida native began by securing pole position and he carried that into a convincing heat-race victory, leading all six laps to carry a top gate pick into the Main Event.

Unfortunately for Stewart, it was a chaotic start to the Main Event after he collided with other rider in turn two and lost his prime footing up front. Re-mounting in last place, Stewart had his work cut out for him as he charged all the way back into the top-10. While attempting a pass on his teammate, Dean Wilson, Stewart made a mistake and got hung up on a tough block, costing him more valuable time. Re-bounding late in the race, Stewart was able to salvage eighth-place on the night.

“I got P1 in practice and I won my heat race, so it was a really good start to the night,” Stewart said. “I had a little mishap in the Main Event – I didn’t have the best start and then I got into it with Anderson and Tomac and I got knocked off the track, and then Anderson and I went down in the next turn and we got back up and we fought. We felt good tonight and it was a good ride for us despite what happened, but that’s part of racing. We’re going to take what we learned and keep moving forward.”

Team rider Dean Wilson had a solid night in Daytona, securing a top-10 finish despite a chaotic night of racing. With a top-five start in 450SX Heat 1, Wilson established a good rhythm to secure a solid top-five transfer. In the Main Event, Wilson grabbed a top-10 start and he made quick progress to overtake eighth by the second lap. Wilson happened to be in the wrong place at the wrong time and he got caught up with his teammate and another rider and went down, dropping him back to 14th. He steadily worked his way back to 11th within a couple of laps and he made another late-race push to secure a top-10 finish in the end.

„My night started off pretty good,” Wilson said. “I was in sixth for a few laps and Malcolm was behind me but I figured I didn’t want to hold him up so I kind of let him by and I think he grabbed the front brake on the turn in the tuf block or something and he fell, then I fell. I almost saved it and then Jason [Anderson] hit me from behind. I was the last guy to get up and I had to make a bunch of passes and lost a bunch of time. It was a bummer but we’ll keep plugging away and moving forward.”