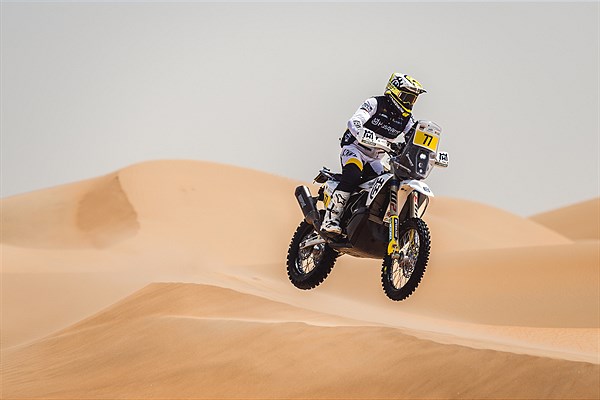 HUSQVARNA FACTORY RACING’S LEADING RIDER ADVANCES TO SIXTH IN THE OVERALL CLASSIFICATION AFTER A TOUGH DAY IN THE DESERT.

Husqvarna Factory Racing’s Luciano Benavides has continued his positive start to the Abu Dhabi Desert Challenge with an impressive runner-up result on stage two. After narrowly missing out on taking the stage win, Luciano now advances to sixth in the provisional classification. For Skyler Howes, after nearly crashing twice early on, the American opted to focus on reaching the finish safely and with a strong pace, ultimately recording the 10th fastest time.

The second stage of the Abu Dhabi Desert Challenge proved to be a serious test of endurance for both riders and their machines. With all competitors racing for well over four hours, it was a long and physical day in the saddle with both Husqvarna Factory Racing riders completing the 316-kilometre stage safely and advancing up the overall leaderboard at the close of day two.

Luciano Benavides, despite taking a little while to find his rhythm across the rolling sand dunes, maintained a strong pace up until he reached the refuelling station. From there, and knowing that the stage win was a possibility, the Argentine upped his speed and navigated accurately. Ultimately securing a runner-up finish on the special, he placed just 39 seconds adrift of the overall stage winner.

Continuing to rebuild his strength and endurance, Skyler Howes rode with caution on stage two to reach the finish line without issue. The American’s strategy worked perfectly as he completed the stage without losing too much time to the leading riders. Howes now lies 11th overall in the provisional standings with three days of racing remaining.

Tomorrow brings stage three of the Abu Dhabi Desert Challenge, the second leg of the event’s marathon stage. With both Luciano and Skyler successfully completing the first leg with their FR 450 Rally machines running perfectly, only the necessary checks were needed ahead of day three.

Luciano Benavides:“Second place for me today is a really good result. It took me a little while to get going on the stage but once I arrived at the refuelling station, I realised that I wasn’t too far from the lead. After that I pushed on to the end and felt great on the bike and everything came together really well. It was another tough stage physically and there was some tricky navigation as well, so I had to really focus and it paid off. It was a great day and we’ll build from here.”

Skyler Howes:“Day two done and it was a long and demanding stage today. Early on I had a couple of close calls and then I saw that Michael Docherty had crashed pretty bad, so I hope he’s ok. From there on I rode a strong and steady pace. I knew it wasn’t enough to secure a decent result, but we have three more days and I know I have a lot more to give. I’m still rebuilding after some time off before this race but I feel good on the bike so it’s on me now. I’ll regroup and focus on tomorrow.”