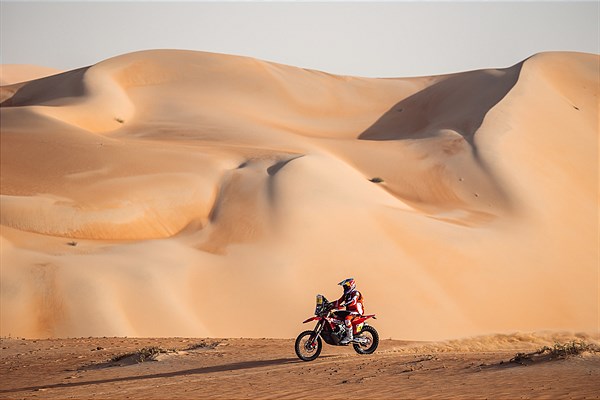 Sam Sunderland has continued his assault on the 2022 Abu Dhabi Desert Challenge with a solid ninth-place finish on the seriously long and tough stage two. Sam currently lies fourth overall in the rankings, but with a strong start position for Tuesday’s stage three, he’s in a really good place to make up the time lost and attack the remainder of the race.

Sam Sunderland:“Day two is in the books. It was a bit of a scary one early on as I saw Mike Docherty had had a crash. I stopped to see if they needed help, but thankfully they were ok. After that I tried to chase down Matthias (Walkner) ahead, but he was doing a good job of opening the stage, so it wasn’t so easy. Overall, it was a really difficult day with lots of dunes, heat, and obviously the longest special of the race. I’m feeling good, happy to get the day done, and now looking forward to tomorrow and the rest of the rally.”

Fourth into stage two, Sunderland knew it would be a long, tiring day. After stopping momentarily to aid a fallen rider, the Brit got his head down and got on the gas to try and catch the one remaining competitor ahead of him. Navigating well, despite being only the second rider through the special, the Dakar Champion made the minimum of errors and lost very little time to the chasing pack.

Lying fourth overall, and with the first leg of the event’s marathon stage completed without issue, Sam will be the fourth rider to enter the 255km timed special on Tuesday’s stage three. With the current rally leader setting off three minutes ahead of him, the stage provides an excellent opportunity to make up time and move further up the order.