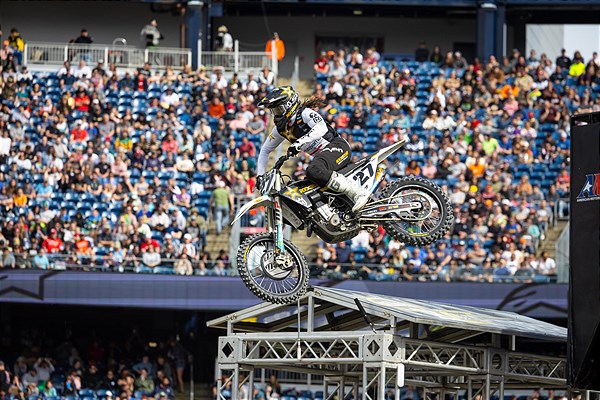 STEWART FINISHES JUST OFF THE PODIUM AT ROUND 15 OF AMA SUPERCROSS SERIES.

ANOTHER HARD-FOUGHT PERFORMANCE FOR HAMPSHIRE IN 250SX EAST.

Rockstar Energy Husqvarna Factory Racing’s Malcolm Stewart is back on a roll late in the AMA Supercross Championship season, securing a hard-fought fourth-place at Round 15 in Foxborough, Massachusetts. With two rounds remaining in 2022, Stewart holds 11 top-five finishes in the stacked 450SX division and he continues to vie for the illustrious number one spot.

Stewart, a notoriously fast qualifier this season, grabbed another great qualifying position in third and he kept the ball rolling with a top-three start in 450SX Heat 2. He maintained a solid pace throughout the eight-lap heat race to secure a third-place transfer.

In the Main Event, Stewart found himself back in sixth off the start, and he raced just outside the top-five for the first eight laps. Hitting his stride just before the halfway mark, Stewart really started to pick up his pace later in the race as he battled his way into podium contention. He put on a hard charge in the final stretch to get within striking distance of third-place, but it wasn’t enough to secure a spot on the podium in Foxborough.

“We did a lot of testing with the team this week, and I feel like my whole bike setup was definitely in the right direction,” Stewart said.“This race was an early one, so it’s always kind of different. In the Main Event, I started terribly and I kind of got pushed out wide and made a few mistakes. Marvin and I were kind of playing yo-yo and lapped riders on the track really came into play toward the end of the race. He got a little ahead of me, and I pretty much rode a quiet fourth.”

Hampshire, the third-place qualifier, had a tough start in his heat race as he found himself on the ground immediately off the start. Struggling to complete the first lap with a distorted front-end, Hampshire went down again before making his way to the mechanic’s area to straighten things out. He put in a hard charge for the rest of the race but didn’t have enough time to secure a transfer spot. In the LCQ, he got out front early on, and he clicked off smooth laps to earn himself a gate in the Main Event.

Hampshire had a redeeming start in the Main Event as he jumped into third early on. Five laps in, he charged into second and immediately set his sights on the race leader of Pierce Brown. As the race wore on, Hampshire continued to close the gap on the leader. He was well within striking distance until he hit the back of Brown’s bike and went down. Re-mounting in sixth, Hampshire rode hard in the last seven laps but wasn’t able to make up any ground, ultimately finishing sixth.

“Man, I had a really tough day,”Hampshire said.“I had good starts again. In the heat race, I crashed right off the start when someone hit me and went to the LCQ. I got some more laps in the LCQ and felt really good in the Main Event. We were clicking them off. I definitely had a shot at that win, and had good speed to do it, but just happened to come together with Pierce with about four or five to go and kind of threw it away tonight. I was happy with the riding in the Main Event.”

Next Round: April 30 – Denver, Colorado