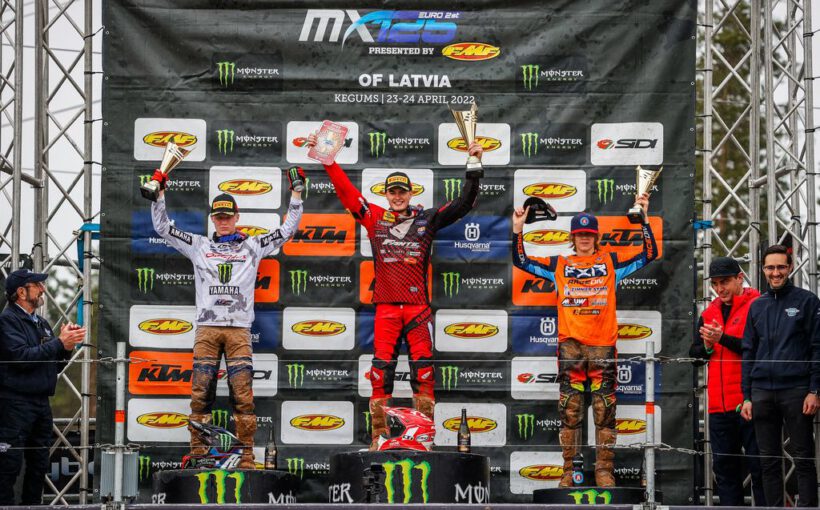 Valk and Butron Top the Box at the Latvian Round of EMX!

The third rounds of the EMX125 Presented by FMF Racing and EMX Open Championship have concluded, with Fantic Factory Team Maddii’s Cas Valk and JD Gunnex KTM Racing’s Jose Butron taking the overall victories at the round of Latvia.

A victory for Valk has allowed him to take control of the EMX125 Presented by FMF Racing series lead, while Butron has closed in to Raths Motorsport’s Michael Sandner who lost a tone of points after not finishing the opening race and now leads by just a point.

But it was a dream day for Karlis Alberts Reisulis of Yamaha Europe EMX125 MJC and his brother Janis Martins Reisulis as the duo challneged at the sharp end in both races, to end their day second and third on the podium, giving the Latvian fans something to cheer about!

In EMX125 Presented by FMF Racing heat one, it was Fantic Factory Team Maddii’s Alexis Fueri who led the way ahead of Maximilian Werner, Yamaha Europe EMX125 MJC’s Ivano Van Erp and Laban Alm, as Karlis Alberts Reisulis of Yamaha Europe EMX125 MJC got himself into fourth. His brother, Janis Martins Reisulis also started well in sixth and had the leaders well in his sights.

Werner then came under immense pressure, as Van Erp was pushing to get by. The Dutchman managed a very brief pass, before Werner fought back. At the same moment Karlis Reisulis sensed his opportunity and got by Van Erp.

Van Erp then crashed out of third, as Janis Reisulis passed Alm to take fourth. In the meantime, Karlis Reisulis was able to get the better of Werner and put on a charge for the leader, Fueri.

On lap three, Karlis Reisulis was the new race leader, as Fueri suffered a problem with his starting device, which jammed the front of his forks. The Frenchman lost a few positions as Janis Reisulis and Fantic Factory Team Maddii’s Cas Valk also went by. Luckily for Fueri, the issue managed itself fairly quickly and he was able to get back into the race and try to re-group.

On the fifth lap, we saw Janis Reisulis make a pass on Werner and from then on we were treated to a very interesting brotherly battle as the Reisulis brothers, and local heroes, led the race.

Werner then dropped another spot to Valk by the following lap, as Janis Reisulis put on a charge of his brother. Four laps from the end, Janis Reisulis was able to make a pass stick, which saw him become the new race leader.

In the end, Janis went on to win ahead of his brother Karlis, with Valk crossing the line third ahead of Van Erp who put on a strong performance to fight back to fourth ahead of Ferruccio Zanchi of Yamaha Europe EMX125 MJC’s.

In race two, Valk led the way after getting a good start and was followed by Zanchi, Van Erp, Mathias Valin and the two Reisulis brother, Janis and Karlis.

Van Erp was fired up in the first lap to get around Zanchi though came short in the end. At this point Janis Reisulis was looking to join the battle too, as Valk began to pull away and focus on his own race.

Van Erp then pushed Zanchi wide, and as a result the Italian lost a couple of positions as Janis and Karlis Reisulis went by. Valk then led by around 2.6 seconds, as Karlis began to take a load of time out of his brother Janis ahead.

Fueri didn’t have the best start to the race as he made his way up the order to 10th place. He eventually managed to fight back to seventh.

On lap six, Karlis passed his brother Janis for third and then a lap later took second from Van Erp, who then had Janis all over his case, as also Zanchi looked to close in.

Towards the closing stages of the race, Van Erp looked to get by Karlis Reisulis and as the pair battled on, Zanchi made the most of this opportunity, passing both to come back to second!

Valk ended up winning the race by more than 16 seconds, with Zanchi second and Karlis Reisulis third ahead of Van Erp and Janis Reisulis.

A 2-1 result gave Valk the overall and also allowed him to take back the red plate, while Karlis Reisulis and Janis Reisulis gave the Latvian fans something to cheer about, as they finished second and third on the podium!

Valk now leads the championship by 23 points over Fueri, with Karlis Reisulis a further 6 points behind in third.

The next round of the EMX125 Presented by FMF Racing will take place in intu Xanadú – Arroyomolinos on the 28th and 29th of May for the Round of Spain.

Cas Valk: “Yesterday I struggled a little bit to get my rhythm but today I finally took the holeshot and just had the perfect race, leading the whole heat and then eventually winning with quite a big gap is really nice. The track was slippery, but I enjoyed it and I’m really happy right now”.

In the first EMX Open race of the weekend, it was Jose Butron of JD Gunnex who grabbed the holeshot and led Nico Koch from Schmicker Racing, Giuseppe Tropepe of Millionair Racing Team, Michael Sandner of Raths Motorsports and Gert Krestinov.

Tropepe then passed Nico Koch to take away second, as Krestinov slid down the inside of the German too, to push him down to fourth.

On lap two, series leader, Sandner crashed out, getting caught up by Erki Kahro with Sandner’s unable to carry on with the race after getting banged up and his bike bent too. Kahro was able to carry on and finished 23rd.

Mico Vettik then made a mistake trying to pass up to 8th, which as a result cost him several positions. Though he was able to recover by the end of the race too, to finish in a solid 5th.

Back with the leaders though, Butron was just 1.231 seconds ahead of Tropepe who was making a charge for the leader after setting the fastest lap of the race. On lap four, Tropepe passed for the lead and started to pull away, with Butron unable to match his pace.

Jere Haavisto was looking strong at the mid-way part of the race, as he passed Jens Getteman of F4E GASGAS Racing Team, as Getteman began to struggle with what looked like arm-pump. Haavisto continued to fight up the order.

Tropepe carried on his triumph at the front, as he continued to escape the grip of Butron, though his pass on the Spaniard was taken under review as it was revealed that the Italian made the move during a waved yellow flag, failing to slow down and then subsequently jumped on this yellow flag too. As a result, Tropepe was docked 10 positions, which put him down in 11th place, while Butron was declared the winner.

Krestinov moved up to second, while Haavisto finished third ahead of Tom Kohut of Osicka MX Team and Vettik.

As the gate dropped for race two on Sunday, it was Vettik who took the holeshot as Haavisto and Tropepe got themselves into second and third. Vettik was looking strong in the lead at the start of the race, though he and Haavisto came together, which put Vettik on the deck and Haavisto into the lead.

Sandner started the race in fourth, with Butron down in around seventh position, as Vettik pished through the field on his way to re-grouping and getting the best result possible.

Krestinov was looking strong in fourth behind Sandner, as the Estonian looked to be on a charge. He briefly got into third, before his bike began to smoke. It looked like it was coming from his radiator which ultimately forced him out of the race and out of the running for a podium finish.

Kohut then passed Koch for fifth, as Vettik began to close in on the pair too. By lap four, Vettik was already in sixth and then two laps later managed to pass Kohut too.

At around half-way mark of the race, Tropepe began to close the gap rapidly to the leader, Haavisto. Within a lap, the Italian managed to take more than a second out of the Finnish rider and on lap 8 took away the lead.

Just behind them, Sandner and Butron were locked in a battle of their own, as not only they battle for top positions but also the championship, as they were separated by just a point.

The pair set their fastest laps of the race in the last lap, though Sandner was able to hold on to third. Tropepe won the race ahead of Haavisto.

A 1-4 result put Butron on the top step of the podium for the first time this season, with Haavisto finishing second and Tropepe third.

After three rounds, Sandner remains the series leader by just 1 point, ahead of Butron and Kohut who is third with 91 points.

The next round of the EMX Open championship will take place in Maggiora in one week for the Round of Italy.

Jose Butron: “I came to this race with one race down in the championship and now I leave closing the gap. In the second race, I didn’t get a good start and with the rain it was more difficult but I’m really happy, we still have three races so we will keep going”.