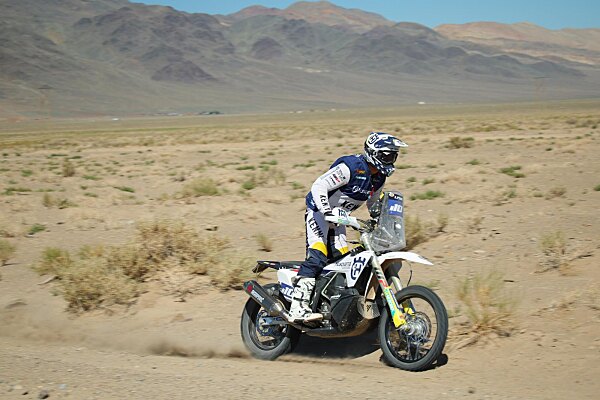 Skyler Howes has won the prestigious Vegas to Reno desert race held in Nevada, USA. Riding his Husqvarna Factory Racing FR 450 Rally in the event, Howes fought back from a difficult qualifying session to take the win on what was an especially tough 2022 edition of the race.

Starting just outside of Las Vegas and covering nearly 500 miles on its way to the finish near Reno, the event is famous for being America’s longest and fastest single-day offroad race. With rain and flooding in the area causing the organisers to alter much of this year’s route, riders faced an extra-technical, but shortened race due to detours around some of the worst hit sections of the traditional course.

To add extra interest to this year’s race, organisers included the Open Pro class in Thursday’s time trial qualification. However, the added challenge didn’t work out well for Howes as a crash on the short three-mile loop resulted in the Husqvarna rider starting as the very last pro competitor in Friday’s main race.

Using both his skill and judgement to battle his way through the dust raised by the racers ahead of him, Howes steadily made progress through the course of the event. With his pit crew delivering a faultless and fast service throughout the day, Skyler was able to keep his head down and focus on the task, and riders ahead.

Fighting his way through to a strong position, Howes found himself in cleaner air in the final 100 miles of the race and was able to push to make up time on his rivals. Ultimately delivering an impressively consistent and near mistake-free ride from start to finish, the FR 450 Rally rider was able to take the win – his second career victory at the event – by just over four minutes from second-placed, FX 450-mounted Dalton Shirey.

Skyler Howes:“I’m super-stoked to get the win! Especially as a solo rider versus the other teams. The organisers did an incredible job of managing the difficult conditions – so many of the dry lake beds were full of water and a lot of the rest of the course was destroyed by flooding. Qualifying wasn’t so good, I had a little tip off that cost me a little time, and on such a short course it meant I set off last of all the pro class on the main race. The dust out there was incredible, thankfully riding the rally bike, I was able to carry on for longer without stopping for fuel and so that helped to make up time on the guys ahead. I just rode my own race and ticked off the miles. With a bit more clear air towards the end, I was able to make up those last few minutes I needed. Dalton crossed the line first, but on corrected time, I managed to take the win by about four minutes. It’s back to training and testing now – we’re working on the roadbook a lot and I want to be at my absolute best in time for Morocco. It’s still a little way off, but I’m feeling good and can’t wait to get back to some world championship racing now.”

Skyler Howes and the Husqvarna Factory Racing team will next be in action at round three of the FIM Rally-Raid World Championship, the Rallye du Maroc, held October 1-6 in Morocco.