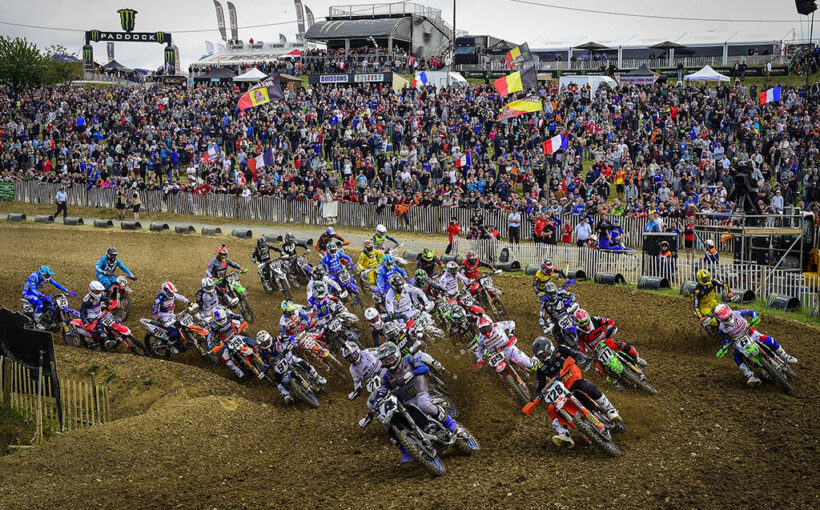 All Eyes on MX2 Title Battle at the MXGP of Charente Maritime.

This weekend, the MXGP of Charente Maritime will see the return of Saint Jean d’Angely to the FIM Motocross World Championship calendar for the penultimate round of the 2022 campaign.

All eyes will be on the title battle between Monster Energy Yamaha Factory Racing’s Jago Geerts and Red Bull KTM Factory Racing’s Tom Vialle who enter the second of the French GPs with a 15-point difference in the championship standings. Could the home GP give Vialle the boost he needs to take back control of the lead? We’ll find out at the MXGP of Charente Maritime!

The round in Saint Jean d’Angely will also decide the EMX250 Champion that is currently to be decided between series leader Rick Elzinga of Hutten Metaal Yamaha Racing and Cornelius Toendel of Fantic Factory Team Maddii who enter the final round separated by 40 points.

Additionally, the MXGP of Charente Maritime will also host the YZ bLU cRU FIM Europe Cup SuperFinale that will see more than 100 riders of Europe’s top-performing YZ125, 85 and 65 riders go head-to-head for one of the biggest junior races of the season that will also give them the chance to win an invite to the bLU cRU Masterclass that will see them being coached by former Factory Yamaha rider Brian Jorgensen and some of the Monster Energy Yamaha Factory riders.

With Team HRC’s Tim Gajser securing the MXGP title last weekend in Finland, this means the focus shifts onto the other medal places still up for grabs in these final two GPs!

For Gajser though, these next two races will hopefully be far more enjoyable rather than the stress-filled Finnish Grand Prix and the last couple of races where he hasn’t performed as well as he would have hoped. Now with the gold plate solidified on the front of his Honda machine and with great memories from Saint Jean d’Angely from 2019, where he won the Grand Prix, we will hopefully see the Slovenian back to his old winning ways.

Last weekend was also a big one for Monster Energy Yamaha Factory Racing MXGP who made history with the first ever Yamaha 1-2-3 on an MXGP podium. Glenn Coldenhoff finally made his comeback to the top step of the podium for the first time since 2020 and was able to celebrate it with his teammates Jeremy Seewer and Maxime Renaux by his side, as they finished second and third overall.

Following his success in Finland, no doubt Coldenhoff will be feeling confident and hungrier than ever for further victories. The Dutchman also moves to third in the championship but cannot afford to relax as Red Bull GasGas Factory Racing’s Jorge Prado and Renaux are not too far behind.

For Renaux this weekend will be an opportunity to make up for his result in Ernée a few months ago where he only managed 8th overall after winning the Spanish Grand Prix the week before that. There is no doubt that Renaux has some unfinished business and will be looking to give his home fans a result to cheer about!

Kawasaki Racing Team MXGP’s Romain Febvre will also be looking to bounce back after an unlucky weekend in Finland that saw him crash in the races and miss out on a podium spot. The Frenchman has been building his strength since coming back at the German Grand Prix and is keen on a podium finish before the end of the season, which he can certainly achieve this weekend on home soil.

Jorge Prado will also be looking to bounce back after finishing 11th overall last weekend in Finland. Prado knows and expects to be performing at the sharp end, but the second half of the season has been challenging for the Spaniard no doubt and with two GPs left on the calendar, hopefully, we can see him back on the box before the end of the season. He also has the motivation of winning the GP at Saint Jean d’Angely back in 2019 (in MX2) so hopefully, that will give him a much-needed boost too.

In terms of the championship, Honda 114 Motorsports Ruben Fernandez and Gebben Van Venrooy Yamaha Racing’s Calvin Vlaanderen are separated by just 7 points in seventh and eighth position. Vlaanderen will no doubt be looking to score top points to close in on the Spaniard, while Fernandez will be keen on putting on a good performance for his French-based team.

There is no doubt what the focus will be this weekend and that is the MX2 Championship chase. 15 points separate Geerts and Vialle, with Vialle entering his home GP with the confidence of winning in Finland.

It was a huge win for the Frenchman who didn’t start his weekend on a good note after crashing in the qualifying race. Though he turned things around by Sunday and was able to put in a 2-1 result which put him back on the top of the box and Geerts dominated the last three rounds on the bounce.

This weekend will be “make it or break it” for the two title hopefuls, as even the most minor mistakes cannot be afforded – which for us, the fans, will make the racing even more interesting!

Monster Energy Yamaha Factory Racing’s Thibault Benistant will be looking to repeat his success of the previous French Grand Prix and get back on the box this time around after a couple of tough races. The last time Benistant was on the podium was back in Czech Republic and with St. Jean d’Angely being a hard-pack track, this will no doubt favour Benistant, who we all know is a skilful hard-pack rider, so we can expect him right there in the mix with Geerts and Vialle.

Ship to Cycle Honda SR Motoblouz’ Stephen Rubini will be another rider to watch out for this weekend along with Big Van World MTX Kawasaki’s Mikkel Haarup and Nestaan Husqvarna Factory Racing’s Kay de Wolf who are in a close battle for 6th in the championship standings as they are separated by 20 points.