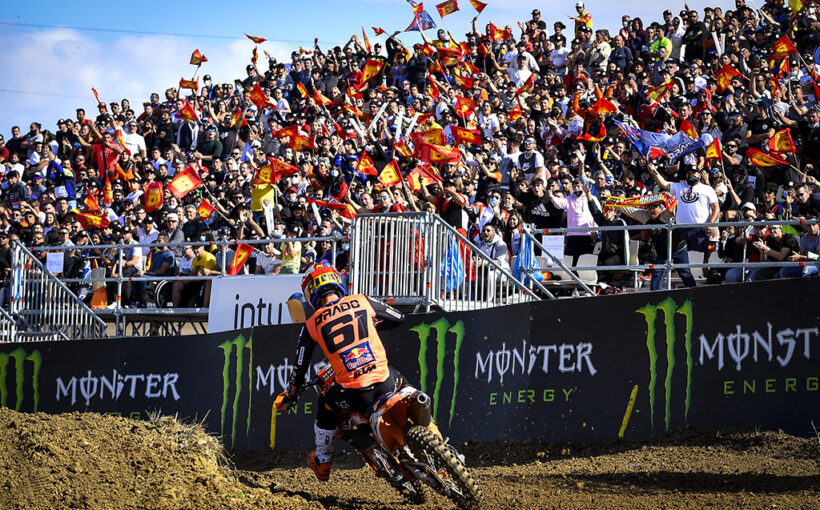 Exciting Weekend Anticipated at the MXGP of Spain.

After a weekend off, the FIM Motocross World Championship continues this weekend with the ninth round of the series which returns to intu Xanadú – Arroyomolinos for the MXGP of Spain!

The hard-pack circuit in Arroyomolinos, close to the Spanish capital of Madrid, was first introduced to the MXGP calendar in 2020, when despite the pandemic, still delivered a fantastic Grand Prix.

This season will be the third consecutive time that MXGP will be hosted in Arroyomolinos, and a huge crowd of Spanish fans is expected. Last season the fan support made for an incredible atmosphere, as the roar of the crowd could be felt and heard throughout each area of the circuit, especially the grandstands!

This time around we will also see rounds of the FIM Women’s Motocross World Championship and the EMX125 Presented by FMF Racing, along with the opener of the Junior e-Motocross series.

Heading into the Spanish Grand Prix this weekend, there is no doubt about who the favourite to win will be. Red Bull GasGas Factory Racing’s Jorge Prado will be the rider to watch as he will be looking to give his fans a show and something to cheer about as he will have his eyes set on the win.

Prado made his return to racing in Sardinia, after a shoulder injury sustained in practice. The MXGP of Sardegna was one of the toughest GPs of the year, thus far, and he still managed to finish on the podium, which was a surprise for him and maybe a few others. Not because he is not capable, but because riding with an injury is never easy!

Meanwhile Team HRC’s Tim Gajser will be looking to bounce back from a tough time in Riola Sardo, after sickness took a toll on him and made for a very hard weekend. The Slovenian could manage a 2-12 result and miss the podium for the first time this season though still continues to lead the championship standings by 81-points over Monster Energy Yamaha Factory Racing’s Maxime Renaux and Jeremy Seewer.

The duo had a tough weekend in Sardinia, while their teammate Glenn Coldenhoff secured his first podium of the 2022 season to finish third overall. Though Renaux and Seewer are known to be strong in the hard-pack circuits and Renaux won in Spain last season in MX2, so both could be podium threats for the weekend.

Though the stand-out rider from the previous GP is no doubt Gebben Van Venrooy Yamaha Racing’s Calvin Vlaanderen. Vlaanderen went on dominate the weekend entirely, going fastest in time practice, winning the qualifying heat as well as both of the races. It was a dream weekend as he claimed his first overall victory in the premier MXGP category, and such a result will no doubt fill him with a lot of confidence going into the rest of the season which will hopefully be exciting for him.

Another noteworthy performance came from Red Bull GasGas Factory Racing’s Mattia Guadagnini, who made the shock move to the MXGP class. After a slow start to his season in MX2 and after not delivering the results he had hope for, it was time for a change of scenery and pace as he moved up to the ‘big boys’ class. Guadagnini put on a strong performance in Riola Sardo where he finished 8th overall, which is a very good starting point and a result to build upon.

Of course, this weekend, all eyes will be on the local riders, not only Prado but also Honda 114 Motorsports Ruben Fernandez who has delivered a string of strong results too and a podium in Latvia. And like any rider, he will be keen on giving his best in front of the home crowd. Another local name comes from KMP Honda Racing’s Jorge Zaragoza who will also line-up in Spain.

Red Bull KTM Factory Racing’s Tom Vialle was the previous round winner at the MXGP of Sardegna on a sand track, which was a big achievement for the Frenchman, who is not typically a sand rider, unlike his title rival Jago Geerts of Monster Energy Yamaha Factory Racing.

Vialle and Geerts battled closely throughout the GP, which is just the perfect representation of what the championship fight looks like, with the pair only separated by six points as Geerts holds the red plate. The Spanish GP is on a hard-pack track, but both riders have proven this year that they can win on various terrains so it’s not so easy to say who will have the upper hand. Vialle has previously won in Arroyomolinos, while Geerts is still chasing his first victory there which could come this weekend.

A couple of weeks ago, Monster Energy Yamaha Factory Racing’s Thibault Benistant joined the pair on the box in Riola Sardo. Benistant delivered two very solid results, finishing 3-3 in the races. Typically, Benistant is a much stronger hard-pack rider which will be a positive thing heading into this weekend’s races, making a back-to-back podium a possibility.

F&H Kawasaki Racing’s Kevin Horgmo finished fourth overall in Sardinia after a couple of costly mistakes, which was also the story for Hitachi KTM Fuelled by Milwaukee’s Isak Gifting who were the top podium contenders on the sand. It will be interesting to see how they can bounce back this weekend on a different circuit.

A rider who could be strong this weekend is Red Bull GasGas Factory Racing’s Simon Längenfelder as he starts to prepare for his home round which is coming in just a couple of weeks. Since his impressive victory in Matterley Basin, we are yet to see the German on the podium, though he has been not too far off on several occasions and the Spanish GP could be an opportunity for him to get back to fighting at the sharp end.

426 Motorsports’ Conrad Mewse is set to miss the MXGP of Spain after sustaining an injury at the national championship in Britain, though the extent of his injury is yet to be confirmed.

Local riders to look out for this weekend includes a couple of names that are familiar to the EMX250 Championship, including WZ Racing Team’s Oriol Oliver, Yago Martinez, Raths Motorsport’s David Braceras and Eric Tomas who will test out their abilities in the MX2 class on home soil.