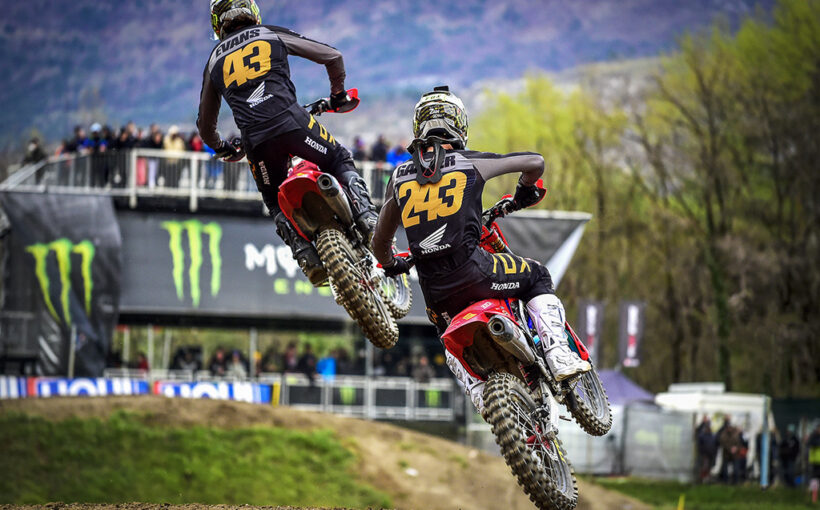 Gajser and Benistant Claim Pole Positions in Qualifying Races at the MXGP of Trentino.

The qualifying races at the MXGP of Trentino have concluded with victories from Team HRC’s Tim Gajser and Monster Energy Yamaha Factory Racing’s Thibault Benistant in MXGP and MX2.

The new track layout created for some interesting races, as the riders got to grips with the new features of the iconic venue.

Alongside the main action, we also saw the first races of the EMX125 Presented by FMF Racing and EMX Open support classes, with Alexis Fueri of Fantic Factory Team Maddii and Giuseppe Tropepe of Millionair Racing Team taking the victories in the respective categories.

As the gate dropped for MXGP qualifying race, it was Team HRC’s Mitch Evans who grabbed the holeshot from Red Bull GasGas Factory Racing’s Jorge Prado, who swiftly moved into the lead ahead of the Aussie, as Monster Energy Yamaha Factory Racing’s Glenn Coldenhoff, Honda 114 Motorsports Ruben Fernandez and Team HRC’s Tim Gajser followed closely behind.

A few riders got unlucky in the first corner, one of them being Jeremy Seewer of Monster Energy Yamaha Factory Racing and possibly Calvin Vlaanderen of Gebben Van Venrooy Yamaha Racing as he started down in last.

Back with the leaders though, Fernandez took third from Coldenhoff, as the Dutchman also got passed by Gajser shortly after. Fernandez then crashed and so did Maxime Renaux of Monster Energy Yamaha Factory Racing, in a separated incident, with both riders losing several positions as a result.

Further down the field, Seewer was making good progress as he got himself up to 12th after passing Alvin Ostlund of JK Yamaha Racing. Around the same time, Gajser took second from Prado as he set his sights on his teammate, Evans, who was still comfortably in the lead.

Gajser then set the fastest lap of the race as he began to whittle away at Evans’ lead, while Fernandez crashed again.

Standing Construct Husqvarna Factory Racing’s Brian Bogers was having a strong ride in fifth as he chased down Coldenhoff, meanwhile SM Action Racing Team YUASA Battery’s Alberto Forato was also looking to join the battle for fourth as he closed in on the pair. Forato was looking fast all day, after setting the fastest lap time in timed practice.

In the closing stages of the race, Gajser closed right in on Evans and on lap nine took over the lead. Prado began to creep in on Evans too and with two laps to go was also able to get around the Aussie.

In the end, Gajser went on to take his second pole position of the 2022 season, while Prado finished third ahead of Evans. Coldenhoff held on to fourth, while Bogers and Forato finished behind.

Tim Gajser: “It was a good race. I didn’t have the best start, even in the beginning I was not aggressive enough, I lost a couple of places in the first lap, but slowly started to find some good lines where I could make some passes later in the race. Then I was behind Mitch, and it was nice to see a 1-2 Honda, then I passed him and you know it was already two laps to go, so I made a little gap and finished the race. Really happy with today and I hope we can do the same tomorrow”.

In the MX2 qualifying race, it was Red Bull GasGas Factory Racing’s Simon Längenfelder who took the holeshot, though it was Monster Energy Yamaha Factory Racing’s Thibault Benistant who jumped into the lead. Hutten Metaal Yamaha Racing’s Rick Elzinga got an impressive start and was running in third ahead of Nestaan Husqvarna Factory Racing MX2’s Kay de Wolf.

Elzinga was looking good, on his very first outing in MX2, though eventually came under immense pressure from de Wolf who passed him on lap two. Geerts then crashed as de Wolf set his sights on Längenfelder, who was not going to back down easily. It took the Dutchman eight laps to finally pass the German.

Benistant meanwhile was looking comfortable in the lead as he stretched it out to 4.247 seconds ahead Längenfelder who continued to come under fire from de Wolf.

Around seven or eight laps into the race, Vialle was starting to look frustrated as he struggled to find a way past Elzinga for fourth. As the Frenchman searched for his opportunity, Red Bull GasGas Factory Racing’s Mattia Guadagnini, Gifting, Big Van World MTX Kawasaki’s Mikkel Haarup and F&H Kawasaki Racing’s Kevin Horgmo joined in on the battle, as things began to look very intense inside the top 10.

On lap nine, Guadagnini crashed out of seventh, while moments later Vialle got by Elzinga for fourth and by the next lap de Wolf was ahead of Längenfelder in second. Elzinga then came under further pressure as he dropped to 8th, allowing Horgmo, Gifting and Haarup past.

In the end, Benistant went on to win the MX2 qualifying race by 4.099 seconds over de Wolf who was second and Längenfelder who finished third. Meanwhile Geerts struggled and only managed to come back to 18th.

Thibault Benistant: “Slowly I start to feel better and better. I still don’t have many hours on the bike, but the day started good with first position in timed practice, so the confidence started to come back. In the race, I got a good start, passed directly and managed the race good. I’m pretty happy and looking forward to tomorrow”.