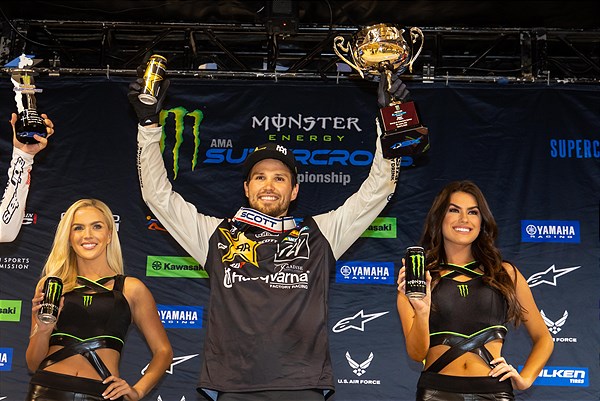 Rockstar Energy Husqvarna Factory Racing’s RJ Hampshire has secured his first-career 250SX win following a top-notch performance at Round 13 of the AMA Supercross Championship in St. Louis, Missouri. Putting together three solid Main Events with 2-2-1 finishes on the night, Hampshire left it all on the racetrack with an emotional culmination in the center of the Triple Crown’s overall podium.

Hampshire’s remarkable performance began with him earning fastest-qualifier for the first time in his career and he carried that momentum into the night show with a powerful holeshot in the first Main Event. Pulling a gap early on, Hampshire led until the seventh lap when he got crossed up in the take-off of a jump and landed on a tough block. He re-mounted quickly, losing two positions, and he charged hard late in the race to reclaim second on the final lap.

He shot off the line in Main Event 2 to secure a second-straight holeshot but a red flag came out on lap two, resulting in a complete restart. Hampshire didn’t let that faze him as he pulled yet another holeshot on the restart and led the first five laps of the race. Halfway through, he lost a position to the points leader but he held strong in second for the remainder of the race.

In an impressive feat, Hampshire aced his fourth holeshot of the night in the last Main Event and he assumed the lead position for the first three laps. Swapping it back-and-forth for the next couple laps, Hampshire eventually walked away from the battle and he cruised into the finish to secure a career-best overall win.

“This is unreal. This has haunted me for so long, I can’t even get words out,”Hampshire said.“I had good times in practice and felt a lot more comfortable on the bike. My starts tonight were unreal and you could tell we made a lot of progress because I holeshot every time I was on the track and led a lot of laps. I’m just so dang stoked for the team to finally get one of these. Big thanks to the guys that have been putting in the work behind the scenes. We put it together tonight, it was our night.”

In the 450SX division, Malcolm Stewart experienced a night of highs and lows, while teammate Dean Wilson had an especially tough night, with a race-ending early in the first Main Event.   Setting the fastest qualifying time for the fifth time this season, Stewart secured a great gate pick for Main Event 1. He blasted his FC 450 Rockstar Edition into the top five out of the gate, quickly moving into fourth. By the second lap, Stewart had moved into third and he held that spot all the way to the checkers.

In the second Main Event, Stewart got off to a sixth-place start and he was on the move early on until he clipped a tough block and crashed. While pinned under his bike, Stewart’s handlebar got caught in his knee brace and the track crew had to assist him in getting the bike free. Eventually re-mounting in last place, Stewart pulled into the mechanic’s area and made an attempt to salvage his race but ultimately made the decision to pull off and prepare for race three.

In Main Event 3, he grabbed a fourth-place start and worked his way into third early on. Still struggling through discomfort from his earlier crash, Stewart shuffled back to fifth and he rode steadily inside the top-five for most of the race before dropping back to sixth with a few laps to go.

Wilson had a strong start to the day after securing a top-10 position in qualifying. However, things took a turn for him in the first Main Event of the night. With a top-10 start, Wilson was racing mid-pack early on but he experienced a hard crash that sent him off-track on lap three. He received trackside medical attention for quite a while before being transported out of the stadium.

Next Round: April 16 – Atlanta, Georgia