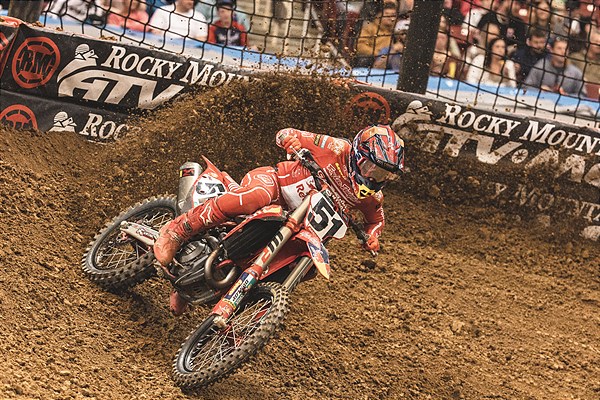 PIERCE BROWN HAS A FIGHTING PERFORMANCE AT TRIPLE CROWN.

Our Troy Lee Designs/Red Bull/GASGAS Factory Racing Team made their way to St. Louis, Missouri this weekend for Round 13 of the AMA Supercross Championship, which also served as the last of three Triple Crown races, and let’s just say it’s onwards and upwards for us! Justin Barcia had a solid day results-wise in the 450SX class, tallying 5-5-4 scores for fifth overall; and teammate Pierce Brown had an evening to forget with some unfortunate luck in the first two races of the 250SX Eastern Championship.

For Barcia and the rest of the 450 field, the unique Triple Crown format boasts three 12-minute/plus one-lap Main Events and consistency was the name of the game for him tonight as he hovered around the top-five in all three races.

Qualifying fifth overall, Barcia had no problem securing a decent spot on the gate for the first Main Event. He grabbed a fourth-place start aboard his MC 450F and mixed it up inside the top-five all the way through the checkers, setting the tone for the rest of the night. Maintaining a steady pace, Barcia raced just outside the top-three in the next two but he never pushed the envelope to move into podium contention. Returning to the traditional 20-minutes/plus-one format next weekend, Barcia looks forward to getting back into his groove at the last four rounds.

Justin Barcia:“I had a good practice going, I qualified fifth and I was really happy with that. I had that weird crash on press day, which kind of threw me off a little bit, and I was pretty stiff all day but I pushed through it. I wasn’t comfortable in the Main Events, I struggled to get a flow and never felt like myself, which is disappointing because I really enjoy this track and stadium. I’m looking forward to Atlanta next weekend to get back on the box.”

250SX East It was a tough night overall for Pierce Brown, despite qualifying inside the top-five earlier in the day. In the first Main Event, he got started in seventh and his early charge came to a halt when another rider crashed in front of him on the opening lap and unable to avoid the carnage, Brown went down and his bike sustained some damages along the way. He attempted to race on but it was clear after coming into the mechanics area that he would have to withdraw from the first race.

With a quick turnaround between races, Brown eagerly returned to the line for the second Main Event but he found himself immediately back in the mechanic’s area with lingering effects from the race-one carnage. Despite all efforts by Pierce and his crew, the MC 250F wasn’t able to line back up after the red flag re-start in race two.

Third time’s a charm! The TLD GASGAS crew came prepared and they made it happen in the third and final race of the night. Charging into second off the start, Pierce immediately fought for the early lead and he made his move about four laps in. At the halfway point, he laid his bike down in a corner and fell back to fourth but he never stopped pushing. Another crash late in the race slowed his charge back to the front and he ran out of time with only 10-minutes/plus one-lap of racing. The young rider did his best to finish strong and salvage sixth in the final race of the night.

Pierce Brown: “Not the best night, I struggled with a lot of things. I was in a bad position in the first race and then another rider hit me and my bike malfunctioned. The team was doing everything they could to get me back out there for the second race but unfortunately the bike just wasn’t 100 percent fixed. Tough one, but we got to start back up in the third moto and I had a good start and ended up passing for the lead. I led for a lap or two but I made a few mistakes and ended up sixth.”

The Troy Lee Designs/Red Bull/GASGAS Factory Racing Team is back in action next Saturday, April 16, for Round 14 of the AMA Supercross Championship in Atlanta, Georgia.