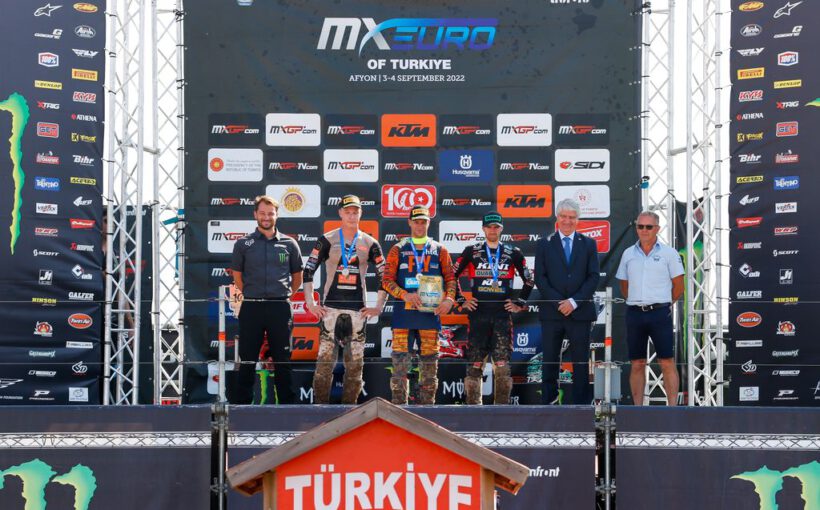 Butron Celebrates EMX Open Title with Overall Win at Final Round in Turkiye.

The final round of the EMX Open Championship saw JD Gunnex KTM Racing’s Jose Butron celebrating the title from the top step of the podium as the Spaniard secured his second overall victory of the season!

The Bitci Round of Turkiye podium was the same as the championship top three, with Tomas Kohut of Osicka MX Team and Michael Sandner of Raths Motorsports joining the winner on the podium as they collected their second and third place trophies and silver and bronze FIM-Europe medals.

In the first EMX Open race, it was Butron who led the way ahead of Sandner and Michael Ivanov. Though Sandner took away the lead from Butron on the opening lap. Kohut made his way up to third with Butron in his sights.

By the end of the first lap, Butron was back in the driving seat as he took back first place from Sandner. The Spaniard then stretched his lead to 4.675 seconds as he set the fastest lap of the race, as Kohut began to come under pressure from a hard-charging Ivanov.

Butron was riding a race of his own, while Sandner crashed out of second, which allowed Kohut through. In the final two laps, Sandner dropped another position as Simon Jost of Osicka MX Team found his way past the Austrian.

In the end, Butron crossed the line first and celebrated his EMX Open title immediately, as Kohut finished second ahead of Jost, Sandner and Krisztian Tompa who rounded out the top five.

In race two, it was Butron who got a good jump out of the gate, though was beaten to the holeshot by Sandner who was the leading rider. Ivanov was second ahead of Butron, though Butron briefly found his way past the Bulgarian.

By the end of the opening lap, Ivanov was able to find the perfect opportunity to go from third to first, as Sandner remained second but Butron made a mistake and dropped to fifth.

Ivanov was looking comfortable in the lead as he led Sandner with a 6.997-second advantage, but moments later a ‚pending penalty‘ message was issued on the timing screen for Ivanov who failed to respect a waved yellow flag and as a result, received a 10-place penalty.

At this point in the race Kohut was the fastest rider on track, in third place behind Sandner, but despite setting the fastest lap of the race, could not get close enough to the Austrian.

In the end, Sandner was declared the race winner, due to Ivanov’s penalty. Kohut was second ahead of Butron, Jost and Tompa.

Butron was declared the overall winner ahead of Kohut and Sandner, which was exactly how the final championship podium ended up too!

Jose Butron: „I’m very happy! I moved to the European class to win it, that was my goal and today we made it happen, I am European Champion! Thanks to my sponsors and my family. Thank you! We are champions now“.