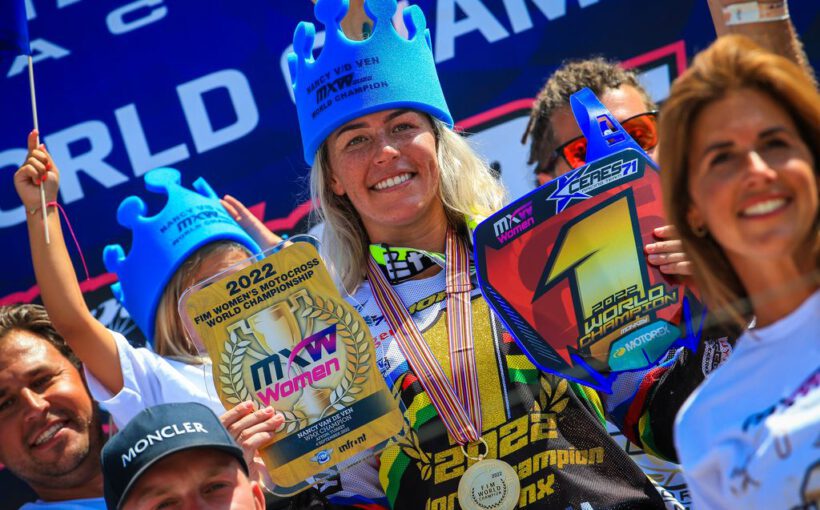 The final round of the FIM Women’s Motocross World Championship was a big one for Ceres 71 Racing’s Nancy Van De Ven who finally got her hands on the gold medal and became the 2022 WMX World Champion!

It was not an easy one for Van De Ven, who was feeling the nerves and the pressure throughout the weekend and missed out on a podium finish after placing eighth overall. But this did not matter as the Dutchman became the very first WMX Champion from Holland and only the fifth Women’s World Champion, joining the likes of Livia Lancelot, Stephanie Laier, Kiara Fontanesi and Courtney Duncan since the series officially became recognised as a World Championship 13 years ago.

In race one, it was Big Van World MTX Kawasaki’s Courtney Duncan who took the holeshot thought got caught up with another rider by the second corner and dropped back to around fifth. This allowed Larissa Papenmeier of Yamaha Racing 423 to take over first place, as JK Yamaha Racing’s Lynn Valk, Amadine Verstappen and Sara Andersen rounded out the top four.

Championship leader, Nancy Van De Ven of Ceres 71 Racing struggled down in ninth after her start device came out before the gate drop, which made it tough for her to get a good drive down the start straight.

By the end of the opening lap, Duncan was already up into second place, as Van De Ven moved up to seventh.

It then took Duncan a lap to catch and pass Papenmeier, who was not looking to back down, as she pushed the New Zealander until the end, as the pair finished first and second and were separated by 4.187 seconds.

Rookie, Lotte Van Drunen had a very impressive first race in the Women’s Motocross World Championship, as she finished seventh behind Van De Ven who fought her way up to sixth.

In the second heat, it was again Duncan with the holeshot as he led the way in front of Elisa Galvagno, Papenmeier, Shana Van der Vlist and Charli Cannon of JK Yamaha Racing.

Van De Ven started in seventh, while Valk was down in 14th on the first lap.

By the end of the first lap, Van der Vlist found her way into second, as Cannon got around Papenmeier for fourth. She then quickly got around Galvagno for third and began to focus on the two leaders in front. The Australian set the fastest lap of the race and was charging hard but a small mistake saw her crash out of third and she eventually re-joined in 10th. This allowed Andersen into third.

Van Drunen was having another impressive race. The youngster started in 18th position and by lap six was already in seventh behind Valk and Verstappen.

A couple of laps later, both Valk and Van Drunen got around Van De Ven, as Verstappen made a mistake which allowed Valk to close in on the fifth-place rider.

Duncan was comfortably leading, with Van der Vlist second ahead of Andersen and in the second part of the race, there were not many changes inside the top 10 as Duncan went on to win her third race of the season.

The podium for the final round included Duncan on the top step with the perfect 1-1 score card ahead of Papenmeier who was second, while Andersen made her first podium visit of 2022!

In terms of the WMX Championship standings, Nancy Van De Ven finally became the World Champion after finishing second for the last four years in a row. Meanwhile, the fight for the silver and bronze medals was very close, but in the end, Valk secured second, while Papenmeier took third – rounding out the perfect podium for Yamaha who also top the manufacturer’s standings.

Nancy Van De Ven: “Finally, after so many years of being second, it feels so great, maybe even better than winning it in one of your first years. I have had so many troubles in the past and to finally win it, is incredible! I just cruised this weekend to avoid any mistakes and keep the bike on two wheels. Finally, finally, finally, I have done it. I am so incredibly happy!”.