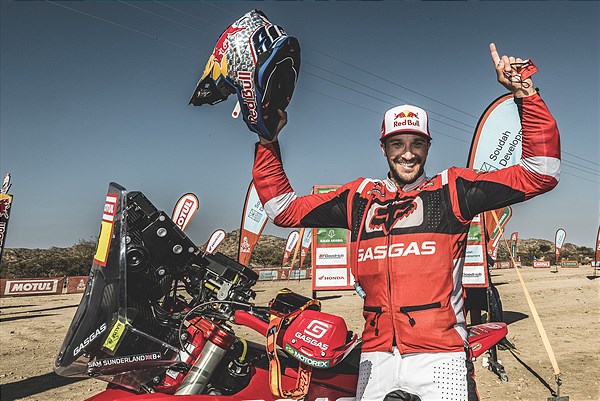 HE DID IT! WE DID IT! SAM SUNDERLAND AND GASGAS ARE DAKAR RALLY WINNERS!

HISTORY MADE WITH FIRST EVER DAKAR RALLY VICTORY FOR GASGAS FACTORY RACING.

Sam Sunderland and GASGAS Factory Racing have won the 2022 Dakar Rally! Delivering exactly the kind of mature, considered performance we’ve come to expect of him over the last two weeks, in finishing eighth in today’s final stage, Sam has claimed overall victory at the 44th Dakar Rally. And, at the end of 12 grueling days of racing across the Saudi Arabian desert, he’s handed GASGAS our first ever victory at the world’s most iconic rally raid event!

Sam Sunderland:“Wow. What a feeling! That 10-minute period waiting at the end of the final stage to see if I’d won felt like a lifetime. But this feeling, knowing I’ve won a second Dakar, will stay in my memory forever. This win feels better than the first as this victory was anything but easy. The times were so close this year and there was no time to let off the gas, it was a really close race, right to the end. All of the hard work, the sacrifices, and everything that the GASGAS team has done for me makes it all worthwhile. It’s been five years since my first Dakar win, and it’s been a long time to wait! I’m super happy to get another win and claim the first one for GASGAS. Everyone on the team has worked so hard to achieve this and it’s a true team effort – together we got the job done. Amazing.”

Leading the race from stage two through to the end of stage six, the Dakar began perfectly for Sam. Riding flawlessly throughout the two-week event, he delivered the goods on multiple occasions when the pressure was well and truly on. Competitive from the very beginning, GASGAS Factory Racing’s Sam Sunderland is 2022 Dakar Rally champion!

Sam’s second Dakar victory is not just an incredible personal achievement, it also marks the return of the title to the KTM AG Company. With 19 wins in the last 22 years, Sam’s victory re-affirms the group’s commitment and ongoing success at the world’s toughest rally raid.

While it’s all about Sam right now and his amazing achievement, it wouldn’t be right to sign off from Dakar 2022 without giving Daniel Sanders the credit he deserves. Our second GASGAS Factory Racing star taking on this year’s event, Chucky claimed two amazing stage wins, and on the final day of racing in week one, led Sam home for a GASGAS one-two. A crash on stage seven resulted in a fractured elbow and wrist, but the good news is that’s he’s had surgery and is now well on the way to making a full recovery. He’ll be back at the Dakar in 2023 for another run at the title.

Norbert Stadlbauer – Rally Team Manager:“Amazing, simply amazing! This Dakar was a really challenging race, right until the very end, so to win, it’s an incredible achievement. Throughout the whole event Sam was smart, strong, and his speed was exceptional. I’m really happy for him and the whole of GASGAS Factory Racing. The entire team has worked so hard to be successful and it’s a really special moment. There’s no feeling like it. I’d like to thank all of the team’s sponsors and partners, everyone in Austria, and now, after a two tough weeks, it’s time to celebrate!”