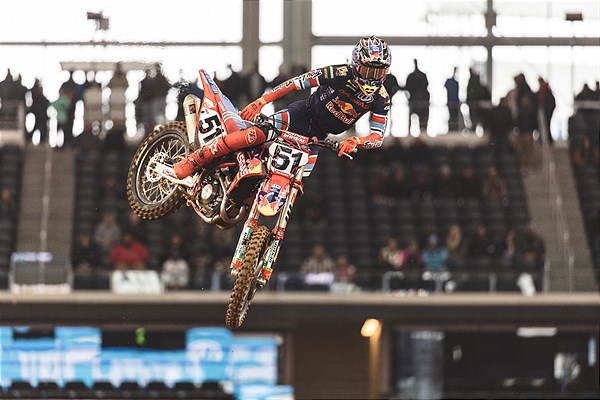 TROY LEE DESIGNS/RED BULL/GASGAS FACTORY RACING FIRED UP FOR SECOND HALF OF RACING IN 2022.

Team riders Justin Barcia and Pierce Brown took on the second “Triple Crown” event of the AMA Supercross season and despite having mixed overall results, both of our Troy Lee Designs/Red Bull/GASGAS Factory riders delivered a Main Event podium in their respective classes! For Barcia, it was a strong start to the three-race format as he enjoyed a second-place podium result in the first 450SX race, while teammate Brown brought it home with a stellar runner-up finish in the final 250SX Eastern race of the night in Arlington, Texas.

With three Main Events in each class, the Triple Crown format shows no mercy when it comes to battles on the racetrack. In 450SX, Barcia grabbed a top-five start for the first gate drop of the night and he battled inside the top-three early on. With two of the front-runners going down ahead of him, Barcia inherited the lead late in the race and he held off Cooper Webb for four intense laps before the defending champ finally got by just before the checkers.

In the second race, Barcia got a 10th-place start and he slowly worked his way up to seventh. Surrounded by fast company, he kept a good pace going but the #51 wasn’t able to make any forward moves, finishing seventh in that one.

With another top-10 start in race three, Barcia had his work cut out for him in the last race of the night as he worked his way from as far back as 11th early on. He got up to seventh mid-way through the race and he put on another charge in the final stretch to round out the night in sixth.

Justin Barcia:„It was a tough one! The first race was good, I felt good on the track I made some great passes and was pretty fast. As the track broke down, I just struggled a bit, and I didn’t get the best of starts in the second and third races, which made it really difficult. And when you get stuck in a little bit of groove, you just get stuck there. We need to go back to the track, do some training and come back swinging at Daytona. I love it there, it’s a fun place and I know we’ve got a good bike, so we’ll have a good time with the crew and be close to home, so that will be fun!”

Lining up for the second time this season, 250SX rider Pierce Brown had a tough start to the day after suffering a big get-off during practice. Despite ending his first session early, Brown was able to salvage ninth in qualifying but he came into the night show a little banged up and it seemed to set the tone early on. He didn’t get the best start in race one, rounding the first lap in 19th, and he shuffled around the top-20 before settling into a 15th-place finish in race one. With a top-10 start in the second main, Brown was ready to go to battle but he suffered another big crash in the whoops, costing him the rest of his race.

The third time proved to be a charm for the resilient young rider as he charged his way to a top-three start in the last race of the night. He moved into second on lap two and from there, he managed a nearly flawless performance to cruise his way to second-place in race three. With combined scores of 15-19-2, Brown came away with 12th overall on the night.

Pierce Brown:“It was a tough day but we didn’t quit, so I think we ended it off on a good note. We started the day off a little rough. In qualifying one, I crashed and knocked the wind out of myself, and it took me a little bit to get up. That kind of snowballed into Q2 and I had some mistakes in the first two races, so it was a tough day until moto three when I finally got off to a good start, put my laps down and rode like myself. Overall, it’s not the day we wanted but I’m just happy to rebound from the tough day that we had. Onto Daytona and let’s just get back to work!”