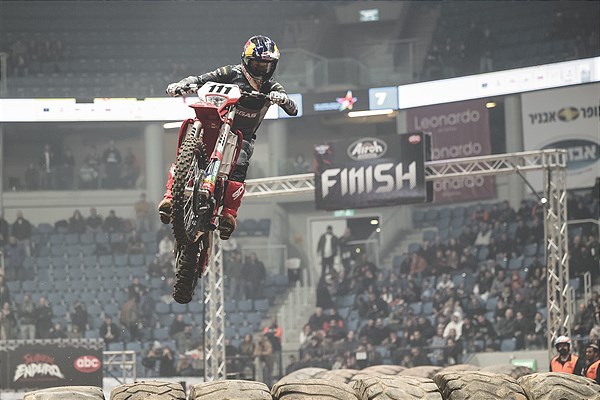 TADDY TAKES A FIGHTING THIRD AT SUPERENDURO IN ISRAEL.

FROM SOIL SAMPLES AND STRUGGLES TO A PLACE ON THE PODIUM FOR BLAZUSIAK.

Taddy Blazusiak:“It was an eventful night here in Israel, but I’m happy to have turned it around and come away with a podium result. Unfortunately, SuperPole didn’t go to plan and it resulted in a bad gate pick for races one and three. In those races I ended up getting boxed out and had some crashes as a result. But it did work in my favour for race two where the order was reversed and I pulled the holeshot. I led for a bit and battled for second the whole way. Claiming second was definitely a highlight of the night as it showed what we were capable of here. There’re two rounds to go in Germany. I know Billy will be hard to catch, but second is there for the taking, so I’ll be fighting the whole way. I won’t be giving up!”

With the series heading to Jerusalem for the first time, it also featured a unique midweek format with Taddy going SuperEnduro racing on a Thursday night! Eager to repeat his podium result from the previous round in Hungary, he knew that a good grid position would be key to a successful night. Especially because of the tight and technical nature of the course. However, with SuperPole qualification not going to plan, it resulted in the last gate pick for races one and three.

Trying to push his GASGAS EC 350F through a small gap in the opening corners of race one, Taddy frustratingly took an unwanted soil sample as he hit the ground. Quickly remounting, he set about racing his way back into contention for an eventual fifth place finish.

Enjoying the first gate pick for race two’s reversed start order, Blazusiak capitalised on his advantage to claim the holeshot and lead lap one. Slipping back one position, he spent the remainder of the race fighting hard for second.

A crash at the start of race three initially looked to have undone Taddy’s impressive work in race two. But the GASGAS rider wasn’t in the mood for backing down and got to work. Ticking positions off, he climbed his way up to fifth and with one last push, grabbed fourth on the final lap. Securing that all-important podium result, Taddy maintains his fight for second in the championship chase.