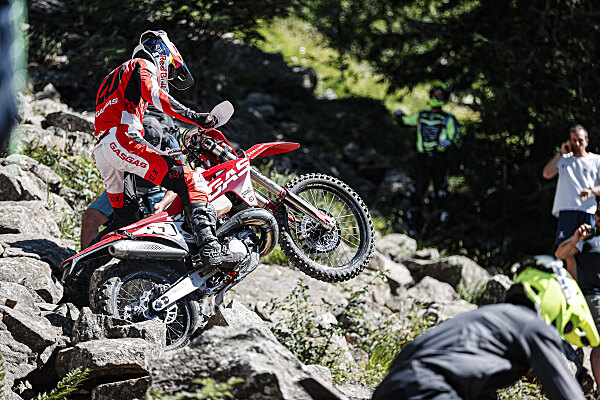 The FIM Hard Enduro World Championship hit full steam as it headed to Italy and the Tuscany mountains for the fourth stop of the season at Red Bull Abestone. After a breakthrough ride last time out at Red Bull Erzbergrodeo in Austria, GASGAS rider Michael Walkner was eager to build on that momentum on his awesome 2-stroke machine.

With Saturday’s qualification a mixture of high-speed enduro special tests and a short, intense straight rhythm shootout, Walkner knew that style of riding wouldn’t work in his favor. But getting his head down, the young Austrian rode smart for 12th.

Eager to get down to business in Sunday’s feature race, Walkner set about working his way up the leaderboard. Using his trial skills to his advantage, he was able to pick off riders on the notoriously tough rock gardens to finish an eventual seventh overall.

Still missing in action, Taddy Blazusiak opted not to contest round four in Italy as he recovers from the wrist injury he sustained while on SuperEnduro duty. The Polish star will be back for round five at Red Bull Romaniacs.

Putting in another stellar hard enduro ride, GASGAS rider Alfredo Gomez raced his way to fourth in Italy. The Spaniard was impressive in the straight rhythm shootout, claiming second place, which put him in a prime position to deliver a top ride on Sunday. Starting out second, Gomez held third for much of the race, before slipping back to fourth in the closing stages.

Michael Walkner: “That was a hard race. My qualification on Saturday wasn’t too good, so I knew I had a bit of work to do for Sunday. I hoped the technical sections would play in my favor and they did at times, although it wasn’t easy. I’m happy with seventh although I hoped for more. Red Bull Romaniacs is next, so I’m excited for that.”