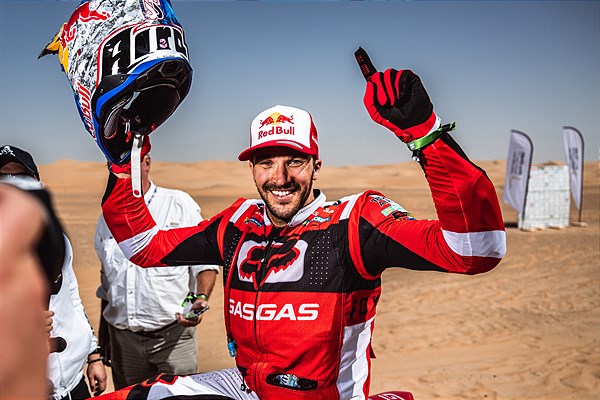 He’s done it! Putting in an impressive display of riding to top the fifth and final stage of the 2022 Abu Dhabi Desert Challenge, Sam Sunderland has won the event in style! The awesome result makes it two wins from two races for Sam in this year’s FIM Rally-Raid World Championship, where he sits dominantly at the top of the standings.

Sam Sunderland:“It feels so cool to get the win! Abu Dhabi is always a tough race with the strategy and that was even more a factor this year as everyone was right on the pace. If you started a stage further back you didn’t seem to catch up so much time even though you were pushing like hell, so it was definitely a challenge this year. It was a tough race physically as well, partly because of the pace, but because of the heat too, as well as it being so close to Dakar. It feels great to get another win and extend my lead in the championship. It also feels good to be able to reward the team like this because they have all worked so hard all week, and it’s results like this that makes it all worth it. The plan now is to keep the ball rolling and carry this momentum into the third round.”

It was close one at the ADDC this year – Sam went into the final 371km stage with a narrow 23-second lead over the second-placed rider. Not backing down, the 2022 Dakar winner came out fighting to deliver what is arguably his most impressive stage result of the event. By kilometer 83, Sam had moved into the stage lead on time and from there he didn’t look back. Steadily increasing his lead, he went on to secure the overall race win.

Clocking in at the finish of today’s stage 34 seconds faster than anyone else, Sam claimed the overall race victory by over three minutes, after close to 17 hours of racing. The result extends his lead at the top of the FIM Rally-Raid World Championship standings to a sizeable 17 points, with three rounds left to race.