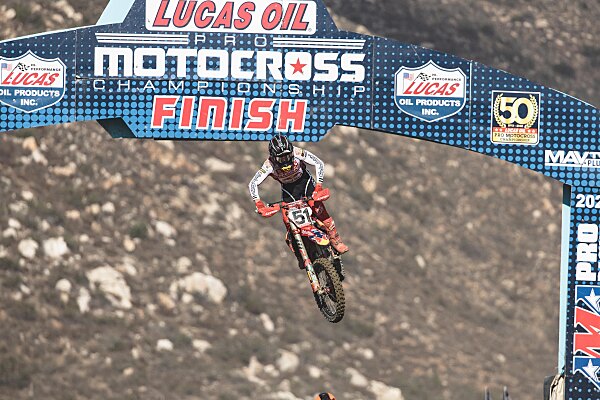 BARCIA IS ALL SMILES WITH A TOP-FIVE PERFORMANCE AT FINALE.

The Troy Lee Designs/Red Bull/GASGAS Factory Racing team returned to where it all began this summer for the second edition of the Fox Raceway National in Pala, California. Serving as the first, and the last, round of the 2022 AMA Pro Motocross Championship, this iconic track is always a good time but riders were faced with extreme heat conditions throughout today’s racing. In the 450 class, Justin Barcia found his momentum just in time to make a statement at the final round with a top-five finish on the day!

It’s been a long season for Barcia but that didn’t stop him from putting on a show for the Southern California fans today! He came into the final round relaxed and ready to have some fun and he did just that in Moto 1 with a great third-place start aboard his MC 450F. He battled up front for the first four laps before eventually settling into a fifth-place finish. With another solid start in the second moto, Barcia raced inside the top five early on, shuffling back to sixth midway through the race. Fighting the extreme heat at the end of the day, Barcia kept his cool and brought it home for a solid sixth in the moto and fifth overall on the day.

Justin Barcia: “Pala was pretty solid but for sure a hot day, I left the jacket at home! I felt really good during the first practice but the second practice I struggled a little bit. I just kept my bike the same all day and I had two really good starts. I got fifth in the first moto, which I was very happy with. I was running up front for a bit and then a sixth in the second moto. Overall, a solid day. I’m happy to finish the season out healthy and just building on next year. I’m going to take a good break now, regroup and come back swinging for next season!”

It was a tough day at the office 250MX rider Pierce Brown, who came away 14th overall at the finale. He put in a good ride throughout Moto 1, ultimately finishing inside the top-10 with ninth. However, he went down twice in the early part of Moto 2 and he wasn’t able to fully recover due to the hot conditions in the afternoon. Fighting to the end, Brown finished 19th in the moto.

Pierce Brown: “Practice was okay, I had like 10th or 11th gate pick. In the first moto, I got a decent start and I made a few mistakes on the first lap but ended up working my way up to ninth at the end. Second moto, I fell twice on the first lap twice and just didn’t recover. I fought until the end, but it just was not the way I wanted to end it.”

Championship Standings – After Round 12