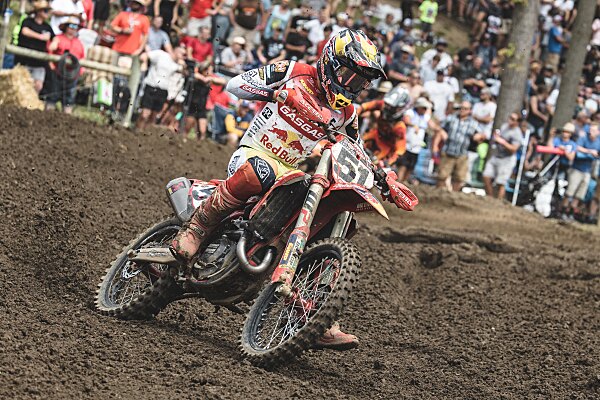 BARCIA LEAVES PENULTIMATE ROUND HEALTHY AND READY TO FIGHT AT THE FINALE!

The Troy Lee Designs/Red Bull/GASGAS Factory Racing team was stoked to come into the penultimate round of the 2022 AMA Pro Motocross Championship and have some fun at our beloved Ironman Raceway National but it wasn’t a walk in the park for anyone this weekend. Barcia held strong for eighth in the first 450MX moto and a gnarly Moto 2 crash took him out of top-10 contention but he’s healthy and ready to take on the series finale next weekend in SoCal. Our 250MX riders weren’t able to tell the same story, as Michael Mosiman and Pierce Brown each experienced some hardship at Round 11.

Barcia came off the line strong in the first 450 moto, capturing a top-five start a maintaining it through the opening lap. He fought to keep the pace of the front-runners in the early laps, settling into seventh for most of the race. Attempting to hold off a hard-charging Jason Anderson later in the race, Barcia was eventually overtaken for the position, leaving him with an eighth-place finish in the first race. He had his work cut out for him off the start of the second moto, rounding the first lap outside the top-20. On a mission, Barcia climbed up to 11th and set himself up for a late strike but a scrubbing incident gone wrong sent him straight to the ground, causing some damage to the bike as well. He was able to straighten things out in the mechanics area and return to the track but it was only enough to salvage

Justin Barcia:“First moto, I got off to a pretty good start and unfortunately just didn’t have the comfort, so I ended up with a P8. I struggled to find my way on the track, so a little frustrating, but we went back and made a few changes. I was looking for another good start in Moto 2 and that didn’t happen, so I made it pretty tough for myself. I made it up to the top-10 pushing and charging pretty hard, and then I scrubbed and caught my wheel, so I ended up crashing. I was able to get back out there but it was kind of one of those things where you just wanted to finish. Definitely a really tough day but we have one more race in Pala, so I’m going to try to do my best, have some fun and see all the fans!”

It was a challenging day for our 250MX riders as well, with Pierce Brown and Michael Mosiman each experiencing their own tribulations throughout the day. Brown found himself buried off the start of Moto 1 and he did his best to make up for lost ground early on, moving into 13th on the second lap. He ran into an issue on the next lap, dropping him back to 20th, and he rallied his way back up to a 13th-place finish. In the second moto, he didn’t get the best jump off the line but he made quick work of the early traffic and got inside the top-10 right away. Unfortunately, he ended up crashing out of the race on lap four, while running ninth.

Teammate Michael Mosiman suffered a race-ending crash on the first lap of Moto 1. He was taken to the hospital for further evaluation and the team will provide an update on his condition later in the week.

The 2022 AMA Pro Motocross Championship will wrap up its 12-round series next Saturday, September 3 with the Fox Raceway II National in Pala, California.

Championship Standings – After Round 11