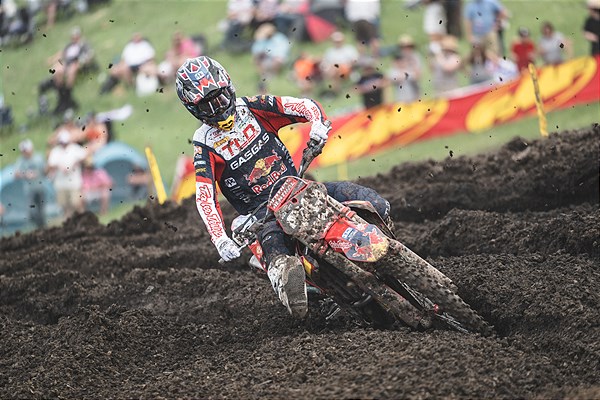 BARCIA STEPS UP WITH FRONT-RUNNING PERFORMANCE AT ROUND 3.

The Troy Lee Designs/Red Bull/GASGAS Factory Racing Team came away from Round 3 of the 2022 AMA Pro Motocross Championship with plenty to smile about after a couple of breakthrough moments from teammates Justin Barcia and Michael Mosiman in Lakewood, Colorado. In the 450MX division, Barcia rallied up front in the first moto to carry a season-best sixth-place finish. For Mosiman, his shining moment came during timed qualifying as he placed the MC 250F onto pole position for the first time in the 250MX division and he followed it up with a fighting performance in both of the day’s motos.

Mosiman, the fastest 250MX qualifier, was stoked to get out for the first gate drop of the day but he went down on the opening lap, dropping him back to dead last right off the bat. With his work cut out for him, he clawed his way back through the field to break into the top-10 but he encountered some bike issues late in the race to ultimately salvage a hard-fought 13th in Moto 1. Bouncing back in Moto 2, Mosiman picked up a top-five start and set his sights on the podium battle right away. Quickly chipping away at the gap to the front-runners, he made his move on lap five and fought hard in third until the last couple laps. Finishing fourth in the second moto, Mosiman scored seventh overall for the day.

Michael Mosiman: “I’ve been looking forward to this round all year, I love riding this track and I always feel comfortable here. We went to work this week and made some improvements on the bike and qualified P1, which is a personal best for me. It felt really good to have the opportunity to pick my own gate. First moto, I didn’t get the best of starts, made some quick passes and then made a mistake but I really was riding good. I started having some bike issues toward the end, which left me kind of limping it home for 13th. Second moto, I had a better start and was riding even better – I felt like I could have gone for a win but unfortunately had more bike issues. The speed is certainly there so I’m looking forward to putting all the pieces together.”

It was a middle-of-the-road day for Pierce Brown, who battled head-to-head with the Colorado soil in both 250MX motos. With an 11thplace start in the first moto, Brown was on his way to working through the field until a mid-race crash sent him back a few spots. He did his best to work through the pack, finishing 11th in Moto 1. In the second moto, Brown got shuffled back off the start and he fought through a few crashes to come away with 12th in the moto, giving him 11th overall for the day.

Pierce Brown:“It was a rough day today. I was on the ground most of the day and just couldn’t get a flow. I’m pretty bummed on it but I guess you’re going to have those days. Hopefully we can be able to bounce back at High Point next week and try to put this one behind us.”

In the 450 class, Justin Barcia had an awesome start to the day as he powered his MC 450F to a third-place start in the first moto. He rolled into the second-place spot early on and it was an all-out battle inside the top-five. Getting passed later in the race, Barcia ultimately secured his best moto-finish of the season in sixth. In the second moto, he got a top-10 start and raced up to seventh in the first couple laps. Dicing back-and-forth inside the top-eight, Barcia locked in a moto-finish of eighth, and seventh overall on the day.

Justin Barcia:“It was a little better day, 6-8 for seventh overall. I was happy with the first moto, I definitely rode really well. The second moto, I struggled a little bit but all-in-all, it was definitely a big improvement. I’m looking forward to heading to the east coast with some good tracks and some good ruts.”

Next up, the crew will head to Mt. Morris, Pennsylvania for Round 4 of the 2022 AMA Pro Motocross Championship.