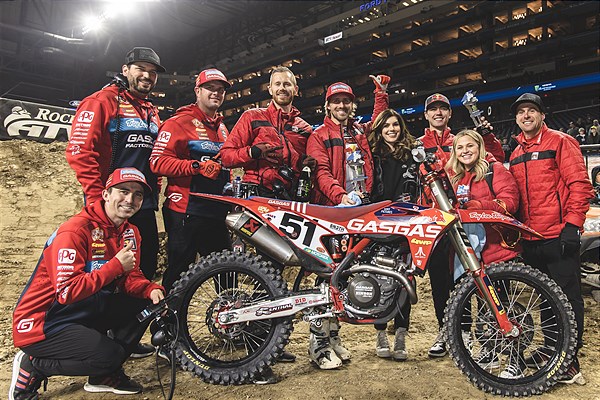 JUSTIN BARCIA AND PIERCE BROWN CLAIM A PAIR OF THIRDS AT ROUND 10.

What a night in Detroit for the Troy Lee Designs/Red Bull/GASGAS Factory Racing Team! Full of carnage, chaos and most importantly, celebration, our riders fought through challenging conditions to each land on the podium in their respective classes. Pierce Brown set the tone with a heat-race win in the 250SX division and he followed it up with a strong Main Event performance to claim his first overall podium of the season. Coming into Round 10 with a finger injury, Justin Barcia exceeded all expectations with a heroic performance earning third-place in the 450SX Main Event!

Early last week, Barcia suffered a practice crash that resulted in seven stitches in his right finger but that didn’t stop him from giving his all in Detroit! Easing his way into the night, Barcia got off to a seventh-place start in the heat and he battled up to fifth halfway through the race. He picked up the fourth-place spot with two laps to go and he held strong to secure a solid transfer into the Main Event.

In the main, BAM BAM came out in full force off the start and he immediately went to battle up front on the first lap. He commanded the lead on lap three, fighting off a hungry group of riders close behind. Doing his best to fight through the discomfort, Barcia maintained a podium position for the first half of racing. Shuffling back to sixth halfway through the 27-lap race, Barcia always maintained his focus, which paid off late in the race when three of the front-runners crashed out ahead of him. With six laps to go, Barcia overtook third and he rallied through the chaos to put his MC 450F onto the podium for the fourth time this season.

Justin Barcia:“I had to dig beyond deep. I didn’t even think I was going to be racing tonight, to be honest. My hand is pretty destroyed, I had a practice crash and it’s scary looking, so I’m just happy to be here. My team did a great job tonight. Today was a test day for us because I wasn’t riding very good, so we did tons of changes and I had a great bike for the Main Event – it was the best start I’ve had all year. I had a lot of fun out there, it was carnage but I just rode a smart race and ended up on the podium, it was sick!”

In the 250SX Eastern division, Pierce Brown has been building up momentum through these first four rounds and tonight was the cherry on top with his first podium aboard the MC 250F. Qualifying a season-best second overall, the 19-year-old kept the ball rolling with a great second-place start in the heat race. Three laps in, he made his move into the lead and he never looked back to claim his second heat-win of the season.

With a top-three start in the Main Event, Brown jumped into second on the first lap and he sprinted after the leader early on. He kept the pressure on through the opening laps and he soon found himself being chased from behind, ultimately getting passed through the whoops. Putting in a hard fight for third, Brown finished out strong to secure his first overall podium of the season in Detroit.

Pierce Brown:“Man, I had so much fun tonight, I really needed that! I’ve shown bits and pieces of speed and I finally showed I could put a full night together. I love these Detroit fans! It’s my first time here and I love it, it’s so much fun. Stoked to put the GASGAS on the podium for the first time!”

The Troy Lee Designs/Red Bull/GASGAS Factory Racing Team will head to Indianapolis, Indiana on March 19 for Round 11 of the 17-race series.