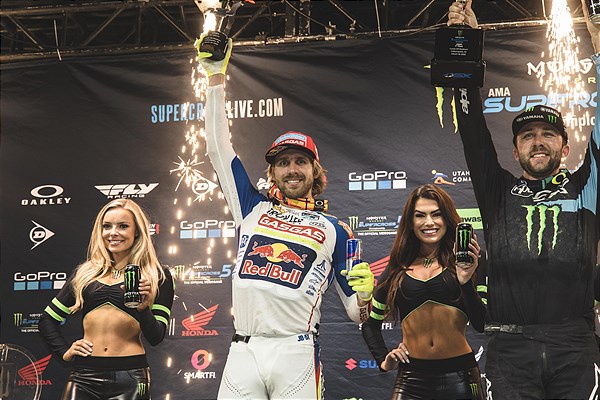 Barcia, Barcia, Barcia! After leading 18 laps of intense battle in the 450SX Main Event, Troy Lee Designs/Red Bull/GASGAS Factory Racing’s Justin Barcia has scored a fighting runner-up finish at the super tough Indianapolis SX. Despite taking a digger in his heat race, teammate Pierce Brown bounced back with an LCQ win and impressive fourth-place finish in the 250SX Main Event!

Qualifying his best of the season in fifth, Barcia aimed his MC 450F toward the front all day. He got off the line in second for his heat race and charged into the lead a few laps in, sweeping the remaining laps to secure his second heat-race win of the year.

In the main, it was all Barcia off the start as he grabbed the holeshot and assumed control of the race early on. With a clear track ahead, he led for six clean laps before the super-rutted track conditions gave way to lapped traffic early on. Barcia made a mistake and lost the lead for a lap but he quickly made a charge back into first on the following lap. Congestion made it tough for Barcia to separate from the field and he was eventually overtaken by championship points leader, Eli Tomac, late in the race. He fought hard to the checkers, finishing just over one-second behind the leader for second.

Justin Barcia:“It was a nice start, it felt good! The team gave me a good bike tonight. I didn’t get the win but second is pretty good, I’ll take it. The track was insane. Man, it was wild! That pass with Jason [Anderson], I’m going to have to watch it. It’s a bummer, I don’t want to see anybody go down. I’m happy with my race and I’m pumped and ready to go next weekend.”

It was a long night for Pierce Brown but in the end, he was able to turn things around with another top-five finish in 250SX East. He qualified inside the top-three earlier in the day, setting himself up for a fun night of racing. During his heat, Brown avoided a first-turn pileup to position himself in second at the start of the race and he quickly went to work chasing down the leader. Making the pass on lap two, he was working on stretching the lead until he made a mistake and flipped over the bars in the whoops, ending his race with a spot in the Last Chance Qualifier. In the LCQ, Brown got the holeshot and went wire-to-wire, earning a transfer into the main.

In the Main Event, Brown grabbed a sixth-place start and he fought his way into the top-five early on. A man on a mission, the 19-year-old continued to rally his way into the top-three and he held off a hard-charging RJ Hampshire for a handful of laps before settling into fourth. He put in a couple burners at the end of the race to just narrowly miss the podium in Indy. Sitting third in the championship standings after five rounds, Brown and the 250SX East will take a week off before hitting it hard with the last five rounds of racing.

Pierce Brown: “It was a somewhat tough day for me. The heat race was going really well, I was in the lead, and then had a pretty big fall in the whoops that shook me up. I went to the medical unit rig and they checked me out to make sure my head was good and my body was okay. I went out for the LCQ and got it done there, and then ended up fourth in the main. It was a tough night but I’m just happy to be somewhat healthy.”

The Troy Lee Designs/Red Bull/GASGAS Factory Racing Team heads back west to Seattle, Washington next Saturday, March 26, for Round 12 of the AMA Supercross Championship.

Championship Standings – After Round 11