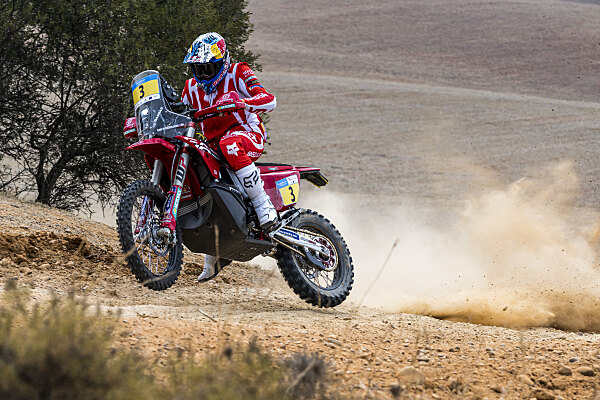 REIGNING DAKAR CHAMP ON THE GAS THROUGHOUT A TOUGH AND TECHNICAL OPENING STAGE IN SPAIN.

One stage down, three to go! Placing second on the opening stage at the Andalucia Rally, Sam Sunderland was on the gas from the moment he entered the 315-kilometer special. Navigating with precision through the rocky tracks of southern Spain with one eye on the ultimate prize – the 2022 FIM World Rally-Raid Championship trophy – Sunderland delivered a strong result to kick off the final round in the best way possible.

Sam Sunderland:“That’s stage one done and out the way. After winning the prologue yesterday I chose to enter the stage in 13th but unfortunately it was a little dusty out there. I thought after the rain we had recently it was going to be perfect conditions, but I guessed wrong there. After about 30 or 40 kilometers I found a gap and got into a rhythm, and it was pretty good overall. It was an intense stage, in and out of olive trees and the terrain was tricky to read, but yeah, overall, we’re one step close to getting it done.”

After dodging camels in Morocco at the previous round of the FIM World Rally-Raid Championship, Sam Sunderland was today dodging olive trees on stage one at the Andalucia Rally. As winner of yesterday’s prologue, Sunderland opted to set off as the 13th rider into the opening special in a bid to follow in the wheel tracks of the leading riders and deliver a winning result.

Expecting pre-event rain to have had more of an impact on track conditions than it actually did, Sam soon found himself riding in dust. But once he’d picked off a few rivals and found some clean air, the Brit was able to put the hammer down and work his way up the leaderboard, delivering a near-perfect performance and posting the second-fastest time.