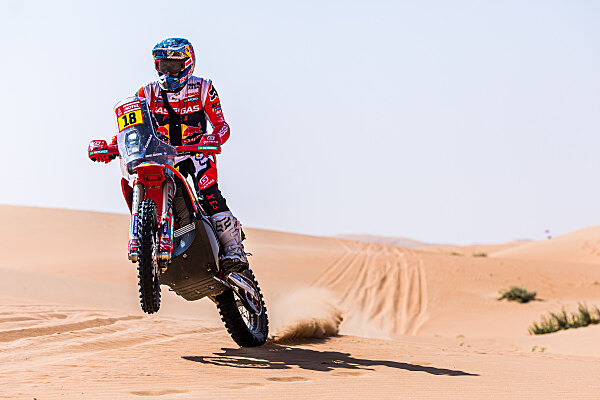 AUSSIE RALLY ACE DELIVERS MASTERCLASS IN NAVIGATION TO SECURE BACK-TO-BACK RUNNER-UP FINISHES AND COMPLETE THE MARATHON STAGE ON A HIGH.

Delivering what just might be his best performance of the entire Dakar Rally on today’s stage 12, Red Bull GASGAS Factory Racing’s Daniel Sanders combined pinpoint navigation with his blistering pace to post the second fastest time. Clocking in just 49 seconds from victory, it was an incredible performance considering that Chucky opened almost all of the special, which left wheel tracks in the dunes for his chasing rivals to follow. Impressive stuff indeed and a clear indication of just what the Aussie’s capable of out there in the desert. Nice work, Daniel!

Daniel Sanders:“Yeah, today was pretty good actually. It was a fun stage and early on I caught up with Luciano Benavides. I had a decent pace going so I kept that up and opened the stage all day. I’m happy to reach the finish line today with it being the second leg of the marathon stage and I’m looking forward to the final two days.”

Second away into leg two of the marathon stage, it should have been a tall order for Sanders to secure another top-three result as it’s quite common for leading riders to lose time to their competition. However, the RX 450F racer left that theory somewhere out there in the Empty Quarter on stage 12!

Moving past Luciano Benavides early on in the 185-kilometer special, our man from down under never let off the gas to safely reach the finish and narrowly miss out on another stage win. Heading into tomorrow’s penultimate stage 13, we’re excited to see what Daniel can do from the front again as the times at the top of the overall classification are starting to get tight!