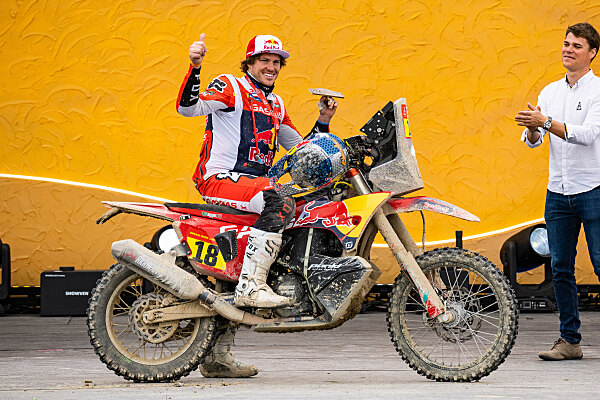 AUSSIE RACER FINISHES AS RUNNER-UP ON FINAL STAGE OF THE EVENT TO SECURE HARD-FOUGHT RESULT.

And that’s a wrap from the 2023 Dakar Rally! Signing off on what has been a truly wild two weeks of racing with a close runner-up finish on the 14th and final stage, Red Bull GASGAS Factory Racing’s Daniel Sanders has brought his RX 450F home safely to secure a gritty seventh place overall result. Not a bad performance at all, especially when you consider that Sanders underwent no less than six operations in the last year following his crash at the 2022 Dakar, as well as getting pretty damn sick halfway through this year’s event. Nice work, Daniel, that was a super-solid effort!

Daniel Sanders: “It was going to be difficult today to make up any time but I did what I could and just missed out on the stage win, but overall, I’m super happy. It’s been a long road to get here. After crashing here last year I’ve had six operations, which really limited my preparation, so it’s been great to bounce back and be competitive. It’s been an unreal experience and hopefully next year I can come in stronger and fitter and be more ready to go. The team has been amazing as always and I’m super happy to be here at the finish line in one piece.”

So, GASGAS didn’t win this time around, but it’s been awesome to be back out in the desert and to kick off 2023 with some epic racing. Despite his sickness during the first week and riding with a decent size thorn in his arm for most of the rally, Sanders really did dig deep to complete the Dakar for the second time. Nice work, Chucky!

And that’s all from Dakar 2023 and what a way to start the year! From the highs of Sanders winning a stage and leading the race for a couple days during week one, to Sam Sunderland’s super-frustrating early departure, it’s been a real rollercoaster.

As the dust, and mud, settles in the Saudi desert, it won’t actually be too long until Red Bull GASGAS Factory Racing return to action. Up next, in late February, is the Abu Dhabi Desert Challenge, round two of the FIM World Rally-Raid Championship.

Norbert Stadlbauer – GASGAS Rally Team Manager: “The 2023 Dakar Rally is now over, and it’s been a really crazy race for the team. It was so frustrating and disappointing to lose Sam, who was the reigning Dakar champion, on day one. Daniel performed very well despite missing most of last season through injury, and in week one he led for a couple of days and won a stage. Unfortunately, a brief illness while leading really effected his race but he kept on pushing to the end and finished seventh which is a great result considering all of the circumstances. I’m really proud of the whole team and we now look forward to the 2023 season.”