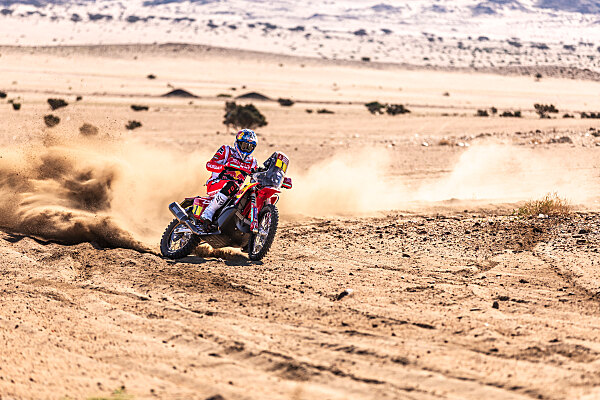 GASGAS FACTORY RACING FIRED UP FOR A SUCCESSFUL DAKAR!

WITH THEIR SHAKEDOWN COMPLETE SAM SUNDERLAND AND DANIEL SANDERS ARE EXCITED TO GET THINGS GOING AT THE 45TH EDITION OF THE DAKAR RALLY.

Tomorrow, December 31, 2022, GASGAS Factory Racing’s reigning Dakar champ Sam Sunderland and teammate Daniel Sanders will finally begin the highly anticipated 45th edition of the world’s toughest rally-raid – the infamous Dakar Rally. As always, the event’s traditional opening Prologue – the fast, short, 11-kilometer sprint – will be used to determine the starting order for the 14-stage event with the first true special stage then taking place on January 1, 2023. It’s set to be a seriously tough race this time around, but for our talented duo, all their hard work with the team has long been completed. Good luck, guys!

Yesterday’s pre-Dakar shakedown allowed Sam and Daniel to break in their RX 450F rally bikes in readiness for tomorrow’s Prologue. Ending the session feeling confident ahead of the upcoming challenge, both riders are in high spirits and more than ready to get down to business.

Already sensing the excitement that builds in the lead up to the Dakar and with high hopes of securing back-to-back wins, Sam Sunderland will soon begin his 10th start at the infamous event. As a two-time winner and having placed third overall on two other occasions, not to mention his multiple stage wins, the Brit has all the tools he needs to once again find success at the toughest rally-raid of them all.

After his incredible Dakar debut in 2021 where he placed a stunning fourth, Daniel Sanders confidently entered the 2022 edition with high hopes of claiming a spot on the podium. Topping the timesheets on two of the first six stages to lie third overall entering week two, he clearly indicated his ability, until an unfortunate crash and serious elbow injury on stage seven ruled the hard-charging Aussie out of the race. After rehabbing for almost a year, Sanders is back and ready to roll up his sleeves and get stuck into Dakar 2023.

Today in the bivouac, things are pretty quiet as Sam and Daniel calmly finish off their final preparations in readiness for tomorrow’s Prologue. Once that’s complete, their focus will switch to taking on the first eight stages of the event before enjoying the mid-race rest day on January 9. After that, six more demanding days of racing remain as they head towards the finish line in Dammam on January 15.

Sam Sunderland:“All the hard work’s been done and we’re pretty much good to go! I can’t wait to get stuck in and I think the first week will be really tough. It’s looking pretty technical and rocky but the second week is more in the dunes, which I prefer. There’s no feeling like preparing for the Dakar. Every year you’re excited, nervous, and all the rest of it. It’s such an incredible race and I can’t wait to get out there and get this thing started.”

Daniel Sanders: “It’s been a long time since I raced and a long time recovering from my crash last year but we’re here and pretty much ready to go. My elbow isn’t quite 100% but once I get out there riding, I know it’ll be just fine. It’s probably going to be the toughest race of my career having been off the bike for so long, especially with there being two more stages this time around, but I’m pumped to be back racing. I’ll be looking for a steady start to the race with the ultimate goal of reaching the finish line. It’s a modest goal but it’s been a long road to get back racing and I can’t wait to get back out there in the dunes and be racing with the boys again.”