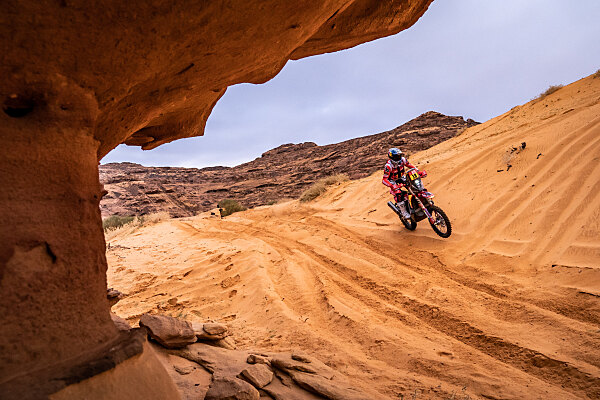 Leading out on stage four, finishing eighth, and retaining his overall provisional motorcycle class lead at the Dakar! Yeah, it was a good day in the desert for Red Bull GASGAS Factory Racing’s Daniel Sanders. Even with a little detour, Chucky remained focused, accurately navigating his way through the rest of the special to retain his lead in the provisional standings. And now, after four thrilling stages, the Aussie stays on top of the overall leaderboard and will enter tomorrow’s stage five with the very favorable starting position of eighth.

Daniel Sanders:“Yeah, today was pretty tricky but I enjoyed it. It’s been quite some time since I led out on a stage and navigating through a stage first is pretty hard for anyone. I did get lost at one point but stayed calm, figured things out, and got back on course pretty quickly. Overall, I was happy with today. I didn’t lose too much time and I’m still leading, so I’m pumped with how the rally is shaping up for me. Now it’s onto tomorrow and a full day in the dunes. I can’t wait!”

Another day done and Daniel Sanders leads the Dakar Rally for the second day running. Faced with the arduous task of opening today’s special after winning yesterday’s stage, the Aussie delivered a near-perfect ride to lose minimal time to his rivals. Things are now looking pretty good for Daniel tomorrow. Set to start the 373-kilometer special from eighth and with a full day of sand surfing on the menu, Sanders can rely a little less on his navigation and a little more on staying on the gas in a bid to extend his lead at the top of the leaderboard.