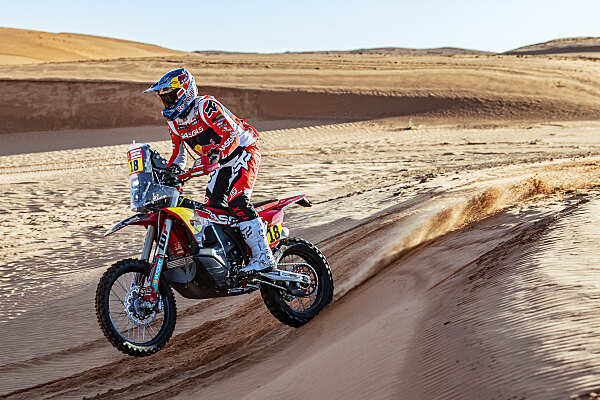 CHALLENGING DAY IN THE DESERT FOR DANIEL SANDERS.

Things were looking pretty good for Red Bull GASGAS Factory Racing’s Daniel Sanders at the 2023 Dakar. Unfortunately for the early rally leader, during the night ahead of stage five, he came down with a sickness bug that zapped near enough all of his energy. But, digging deep from the moment he entered the stage five special, Sanders safely reached the finish line in 21st and will now do all he can to rest, recover, then prepare for tomorrow’s stage six. Daniel now lies eighth overall with nine days of racing still remaining.

Daniel Sanders:“It’s been a bit of a struggle today to say the least. When I woke up, I didn’t feel good at all. I had no energy, couldn’t really eat or drink anything, so it seems like I’ve picked up some kind of bug, I guess. So yeah, it’s a bit of a bummer after starting the rally so well. What made things even tougher was that my bike is set up to work at higher speeds and I just didn’t have the pace I needed today. So we’ll make a few changes ahead of tomorrow to dial the comfort back in and hopefully with some rest I can be back fighting up front again.”

Each day at the Dakar is incredibly tough for every competitor. And they’re made even tougher when a sickness bug wipes out a racer’s energy levels right before another long day in the desert. Frustratingly, this was the story of stage five for Daniel Sanders. After getting the 2023 event off to the best start possible, Chucky came down with something nasty in the hours leading up to the fifth special which understandably affected his result. Lying eighth overall, Sanders will now get some much-needed rest ahead of tomorrow’s stage six and all being well, come out fighting for another stage win and begin climbing back up the leaderboard.