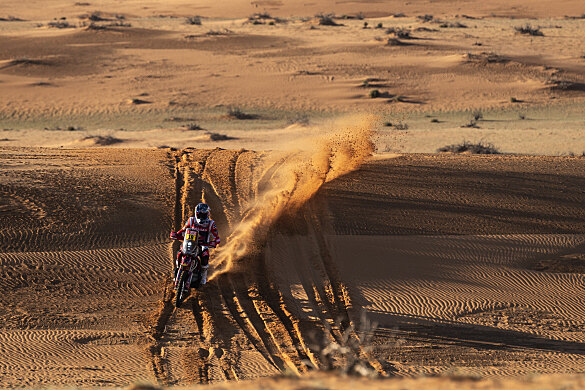 DANIEL SANDERS GETS BACK TO BUSINESS WITH SECOND OVERALL ON DAKAR RALLY STAGE EIGHT.

AS THE DAKAR PASSES THE HALFWAY MARK THE RED BULL GASGAS FACTORY RACING STAR DELIVERS PIVOTAL RESULT TO REJOIN THE RACE FOR VICTORY.

Perhaps the one racer benefitting the most from the cancelation of the timed special on Dakar stage seven was Red Bull GASGAS Factory Racing’s Daniel Sanders. Able to replenish his energy levels a little more on Saturday, Chucky came out swinging on today’s stage eight to post the second-fastest time. But most importantly of all, Sanders chopped almost 12 minutes out of the current leader’s advantage in the provisional rally standings! Nice work, Daniel, nice work indeed.

Daniel Sanders: “Damn it was pretty wet out there this morning! For the guys out first it must have been pretty bad, and navigating was tough because of the rain and sand on the goggles. But overall, it’s been a good day. I was fortunate to get a bit of a recovery day yesterday, and I used that time to get some rest and I was able to keep what I ate and drank down, so coming into today things were a lot better. We have another rest day tomorrow, so I think going into next week we’ll be much closer to 100% and I’m excited for week two now that I’m feeling a lot more like myself.”

For Sanders, it’s been a wild first week of racing at the Dakar to say the least, but it ended on a highly positive note. Placing second and almost able to ride to his full potential, the Aussie charged through stage eight to deliver what may well be his most important result at the 2023 event. With six more stages to go, the race for victory is beginning to heat up and our man from down under is now starting to get back to the kind of form that saw him lead the rally for a couple of days during week one. Enjoy the rest day, Chucky, as the serious business continues on Tuesday…