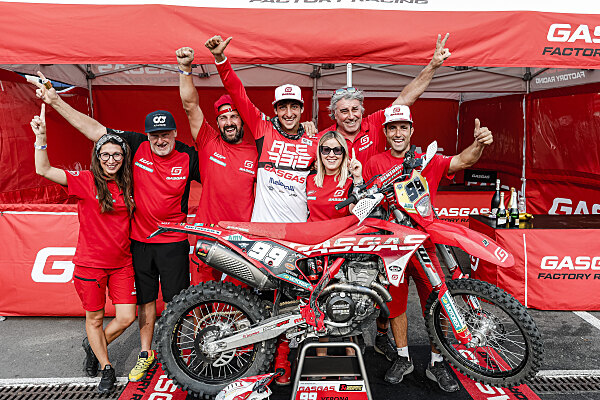 Andrea Verona – 2022 Enduro1 World Champion! Sealing the deal with one round to spare, the GASGAS Factory Racing star secured the title at the EnduroGP of Hungary after charging to his fifth 1-1 result of the season. Fast, consistent, and always fully focused on the job at hand, Verona is undoubtedly a worthy winner of his third E1 title in a row. And following another strong performance, his margin at the top of EnduroGP has increased to an impressive 28 points ahead of the final round in Germany. Bring it on!

When it comes to Andrea Verona, the result sheets don’t lie. He is just so fast and just as importantly, incredibly consistent. Through six rounds of E1 racing, he’s won 11 of the 12 days contested and narrowly missed out on a clean sweep after finishing as a close runner-up on day two of the EnduroGP of Slovakia.

Heading into round six of the FIM EnduroGP World Championship in Hungary, Verona enjoyed a healthy 28-point lead at the top of the Enduro1 World Championship standings and kicked things off with a winning start. By setting the fastest time on Friday night’s Akrapovic Super Test, he also topped that series with one round to go.

When the first full day of racing wrapped up on Saturday, Andrea’s nearest championship rival in E1, Thomas Oldrati, finished ninth. This gave the EC 250F racer a commanding 40-point lead ahead of day two, meaning that all he needed to do was finish ahead of his fellow Italian on the second day of racing to claim his third E1 title.

And that’s exactly what he did! Despite a few small mistakes early on, Verona was soon back to his very best from the fourth test of the day onwards to make it a double E1 win and secure his third straight Enduro1 crown. Verona’s performance in Hungary was rewarded with two strong results in the EnduroGP class – third on Saturday, and second on Sunday. And it’s this consistency and pace that has built his healthy 28-point lead at the top of the combined category, with just one round left to run.

And now, we wait. With 10 weeks to go until what’s set to be an epic showdown for the EnduroGP title at the final round of the series on October 14-16 in Germany, Andrea will compete for Team Italy at the prestigious ISDE which begins later this month.

Andrea Verona: “It’s such a great feeling to have now won three Enduro1 titles in a row and the last two with GASGAS. It’s been an incredible effort from the whole team to build me such a great bike and I have to thank everyone involved with what we have achieved over the last two seasons. The level in EnduroGP is so high right now that mistakes can easily happen. I had a couple of small crashes Saturday which cost me some time and maybe some positions in EnduroGP, but I ended up third on Saturday and second on Sunday which increased my lead to 28 points. I won both days in Enduro1 which was enough to secure the title a round early so now, the focus is on the final round in Germany and the EnduroGP title. I need to be as prepared as possible for that one and I’m looking forward to the battle.”