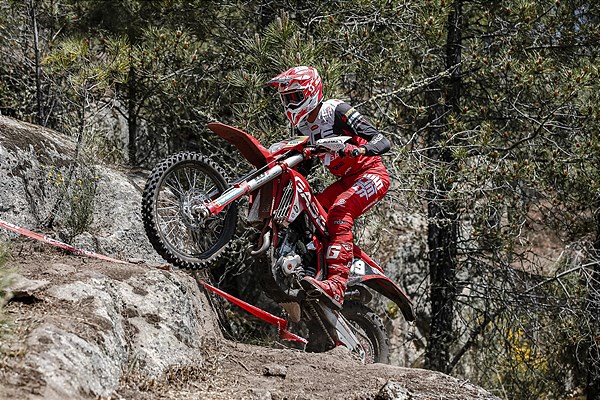 ANDREA VERONA BRINGS THE HEAT TO PORTUGAL AND MAINTAINS HIS IMPRESSIVE START TO THE ENDUROGP SEASON.

One week on from his incredible ride at the 2022 FIM EnduroGP World Championship season-opener, Andrea Verona has put in a champion’s performance at the GP of Portugal to place third overall in EnduroGP and maintain his E1 winning streak. Proving his performances in Spain were no fluke, Verona spent his entire weekend locked in a fierce battle for the top spot in EnduroGP and leaves Portugal third in the championship, just one point adrift of the series leader. It’s a different story in E1 though as the Italian once again secured victory on both days to maintain his perfect start to the season and extend his margin at the head of the championship standings!

The GP of Portugal kicked off with the traditional Super Test on Friday night and once the racing had wrapped up under the floodlights, the times at the top of the timesheets couldn’t have been closer. With the top four separated by less than a second, Verona placed third overall and top E1 class racer, kicking off his weekend with a confidence-inspiring start.

Day one and once again Verona was at the sharp end of the results. The reigning E1 champ won seven of the 12 special tests to claim maximum points while in the hotly contested EnduroGP class he delivered a strong performance to secure third overall, just 46 seconds from the overall win after over one hour of racing.
Picking up his pace throughout the second day of racing in Portugal, Andrea only dropped out of the top three on one of the special tests to secure his fourth straight day win in E1 and maintain his so far perfect season. The Italian’s improved speed spilled over into EnduroGP where he challenged eventual winner Wil Ruprecht all day for the top spot. Ultimately placing third, Verona now sits tied for second in the EnduroGP standings, just a single point behind the new leader.

Andrea Verona:“It’s been another great weekend of racing for me. Not quite as good as last weekend but to finish third in EnduroGP and win E1 again, it’s a great start to the season. On Saturday my riding wasn’t the best on some tests, but I was able to fix that for Sunday and I rode much better, so I’m really happy with my progression from day one to day two. Overall, I’m really happy with my weekend and up next is my home GP in Italy so I can’t wait for that one.”