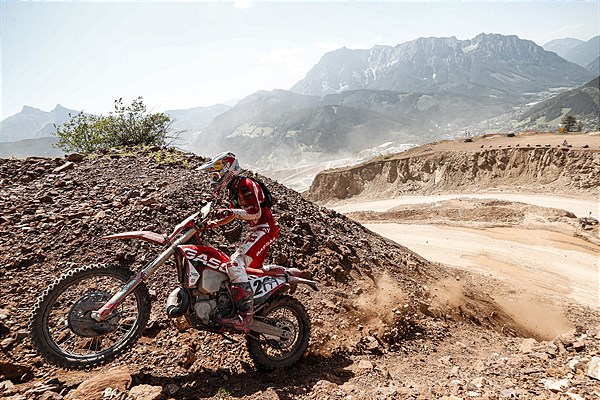 What a ride! GASGAS Factory Racing’s Michael Walkner makes history at the Red Bull Erzbergrodeo to become the best-ever Austrian finisher at the Iron Giant with sixth. Putting in a simply heroic performance, Walkner rode his heart out at the third stop of the FIM Hard Enduro World Championship in Austria.

Michael Walkner:“I’m so happy to get this result. It’s my home race and such an iconic one too. I gave it my all from the very start. I wanted to push hard to stay near the front as much as possible. To ride in second for so long was amazing, but at Carl’s Dinner I was running out of steam. I found a tiny bit of energy in the tank at the very end and got sixth.”

In what’s turning out to be a breakthrough year for rising hard enduro superstar Michael Walkner, the young Austrian left it all on track at the iconic Red Bull Erzbergrodeo to claim a brilliant sixth place.

Arriving at the legendary Iron Giant following a career-best sixth at round two in Serbia, the EC 300 mounted rider was eager to claim a memorable result at his home race. Hitting the ground running, Walkner blasted his way up the Iron Road Prologue qualification to qualify seventh fastest out of 1500 competitors. His impressive speed easily secured him a front row start for Sunday’s main race.

Wasting no time in making his mark, Walkner fought hard from the drop of the flag to battle his way into the top five on the early hillclimbs. Feeling confident, he jumped up to second during the demanding Machine section. Holding that position, he managed to close the gap to race leader and eventual winner Manuel Lettenbichler during Udo’s Playground.

However, the early intensity and hot weather began to take its toll on Michael during the Carl’s Dinner boulder garden and he slipped down to seventh. But, willed on by his home crowd during the closing stages, Michael made one last push to snatch sixth at the finish line.

For round three, Michael was joined by a returning Taddy Blazusiak. Although not quite up to full fitness, Taddy elected to only contest the prologue, where he placed 14th. He hopes to make a full return to racing for round four, Red Bull Abestone next month.

Ensuring a great day for GASGAS mounted riders, AG Racing 89’s Alfredo Gomez raced his way to fifth overall. The former Erzbergrodeo winner put in a solid ride in the punishing heat. A steady start saw the experienced veteran work his way forward from ninth to as high as fourth, before securing fifth at the checkered flag.

Championship Standings After Round 3 (Provisional)