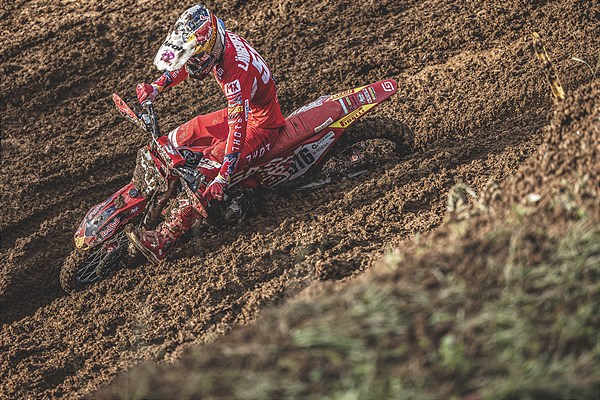 Simon Langenfelder was one of the few riders to make significant progress in the first MX2 moto; he started outside of the top ten and managed to claw his way into sixth by the time that the checkered flag fell. ‚516‘ did impress with very fast lap times in the second half of the moto. Such noteworthy speed was put to good use in the second moto; he raced to third place and shadowed the leaders through the first half. 6-3 scores put him in fourth overall at the Grand Prix and helped him take control of third in the championship standings.

Simon Langenfelder: „Today was a good day! I was almost last in the first race, but I made some passes and my speed was very good in the end. I was quite happy about my sixth place! My start was a lot better in the second race. I was really, really fast and catching the top two. The track was so difficult and I had a nice gap behind me, so I decided to take it easy and stay safe. I finished fourth overall and, unfortunately, not on the podium, but I think that we will be back on the podium soon.“

Mattia Guadagnini was desperate to repeat the success that he experienced at Maggiora one year ago and, supported by thousands of passionate Italian fans, appeared set to do so. ‚101‘ went a second quicker than his peers in the timed session on Sunday and leapt into the lead in moto one, after sprinting to the holeshot aboard his MC 250F. Unfortunately, a crash in turn three was followed by an additional mistake that forced him to retire prematurely. Another crash in moto two halted his charge for a top-three ranking and restricted him to tenth at the checkered flag. Guadagnini was classified in seventeenth overall.

Mattia Guadagnini: „Today was pretty bad. I was feeling really, really good all weekend though! I took the holeshot in the first moto and felt really confident, but then I threw the race away in the third corner. I did not have such a bad start in moto two; I was fighting for fourth place when I crashed. I re-joined the race and tried my best. I finished tenth – that was not what I wanted. I feel really good on the bike at the moment, but it is just not showing up in the results. We are going to keep working on that.“

Red Bull GASGAS Factory Racing do not have far to travel over the next week – the eighth stop of the 2022 FIM Motocross World Championship will be held in the soft stuff at Riola Sardo. The Grand Prix of Sardegna is set to go off on May 15.