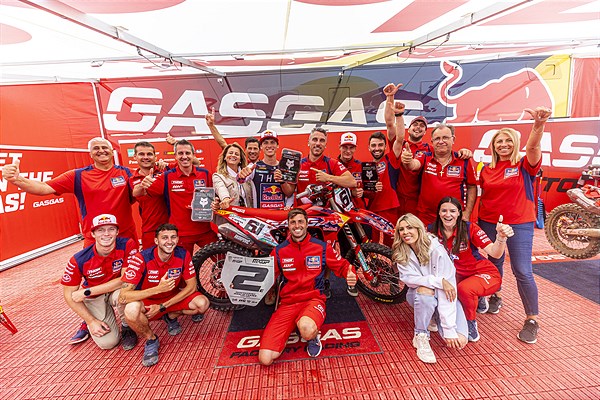 JORGE PRADO RACES TO SECOND OVERALL AT THE MXGP OF FRANCE.

PRADO SECURES HIS SEVENTH PODIUM FINISH OF 2022 SEASON AT ERNEE.

Red Bull GASGAS Factory Racing just enjoyed even more podium success at the tenth stop of the 2022 FIM Motocross World Championship, the Grand Prix of France, despite an extremely difficult circuit. Heavy rain turned the iconic circuit of Ernee into a deceivingly tricky layout, but Jorge Prado excelled and placed his MC 450F onto the podium for the seventh time this season.

Even a poor gate pick could not stop Jorge Prado from claiming the holeshot in moto one at the Grand Prix of France. ’61‘ led for a lot of the race; it looked effortless as he picked his way around the technical circuit. Prado was eventually ranked in second position, just a few seconds behind the winner at the end, and put himself in a good spot entering the final moto. Third was his ranking in moto two, after yet another holeshot aboard his MC 450F, which left him in second overall at the Grand Prix of France. Prado is still fourth in the championship classification.

Jorge Prado: „My starts were so good from the outside! I was riding quite okay and felt good in both motos. The last laps were not the best, but I need to work on that. I feel good though – I am very happy about that. I am happy to bounce back here, after last weekend, and finish in second position. I just need to keep rebuilding after my injury, then I will be back and ready to battle until the end of the motos.“

Simon Langenfelder started his weekend in an incredible fashion; he sprinted to pole on Saturday and took some valuable momentum into Sunday’s motos. The power within his MC 250F helped him get on the gas and take the holeshot in MX2 moto one. ‚516‘ turned the brilliant start into his third moto podium in a row, as he eventually crossed the finish line in third place. Unfortunately, a poor start left him with a lot of work to do in the last moto. Langenfelder did well to go from the lower half of the top fifteen to fifth at the end though – he was ranked in fifth in the overall classification as well. Langenfelder is sat in third place in the standings.

Simon Langenfelder: „I was really happy with my riding today, even after such a bad start in that second moto. I was fifth overall and just two points away from the podium. If I could have just passed one more rider then I could have had a shot at the podium, but it was tough to pass out there. It was the same for everyone though. I took a good number of points again today. I am looking forward to my home race.“

Mattia Guadagnini was unable to compete, after crashing out of free practice on Saturday. Updates on his status for the upcoming races will be published when available. Everyone at GASGAS Factory Racing cannot wait to see him on his MC 450F again!

The Red Bull GASGAS Factory Racing team head to Germany now, where thousands of fans will be keen to meet Simon Langenfelder. The Grand Prix of Germany, round eleven of the Grand Prix series, will be run at Teutschenthal on June 11/12.