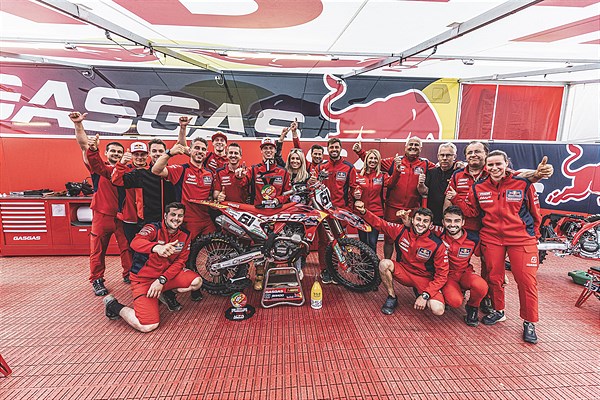 JORGE PRADO GETS ON THE GAS TO WIN THE MXGP OF PORTUGAL.

JORGE PRADO RACES TO FIRST OVERALL VICTORY OF 2022 AT AGUEDA..

Jorge Prado just took his MC 450F to a thrilling overall win at the Grand Prix of Portugal, round four of the 2022 FIM Motocross World Championship, and gave the thousands of Spanish fans who crossed the border a weekend to remember. The iconic circuit of Agueda played host to the Portuguese event.

Jorge Prado was sensational in the first premier-class moto – he jumped into the lead immediately and controlled the race from there. Prado led every single lap en route to his third moto victory of the year. Another perfect start in the second moto meant that he grabbed the holeshot and early lead. Second was the position that he secured at the end of that moto, which was more than enough for him to claim his first Grand Prix victory of the season and his first in Red Bull GASGAS Factory Racing colors! Prado now sits second in the championship standings too; 21 points is the deficit to the current championship leader.

Jorge Prado: „It is great to get back on the top of the box! It is hard to do because everyone is riding very fast and it has been hard for me to ride like myself up until now. Everyone wants to win and it has been a long time since I last did it. I am very happy about going 1-2 for the overall. The second moto was really hard, but we got it.”

Mattia Guadagnini was eager to put his MC 250F on the podium in Portugal, after such a strong showing in Patagonia-Argentina, and started well by securing second in qualifying. Unfortunately, a superb start in the first moto was ruined by a crash in turn two and then another fall restricted him to twelfth at the checkered flag. The second moto was not quite as eventful; he started ninth and finished fifth with some of the fastest lap times of the race. Eighth overall was secured via a 12-5 scorecard and he occupies that same spot in the points.

Simon Langenfelder salvaged some solid points at the Grand Prix of Portugal, despite a crash in qualifying that left him battered and bruised. Langenfelder was en route to a top-ten ranking in the first moto, but a mistake in the latter stages pushed him down to thirteenth. Ninth was claimed in moto two via a consistent ride over the thirty-minute moto. Fourth is the position that he holds in the standings, after grabbing ninth overall in Portugal.

Mattia Guadagnini: “My riding was really good this weekend, but I just made too many mistakes. That cost me a podium and maybe even a win, so I am quite sad about that. I think that we have some positives to take from the weekend though, like the start in the first moto and my riding. We are just going to keep working! The championship is long and we need to be there fighting for the podium.”

Simon Langenfelder: “I crashed in qualifying and hit my thumb, which hurt my gate pick for today. I tried to make some good starts and was good out of the gate. I just got pushed outside in both races though! I went forward in the first race, but had a small crash. I was consistent in the second race and riding okay. I was not like my normal self though. It was not the best weekend. We are going to build on this though!”

The fifth round of the 2022 FIM Motocross World Championship is not too far away for the Red Bull GASGAS Factory Racing trio. Pietramurata, Italy, will host the Grand Prix of Trentino next weekend.