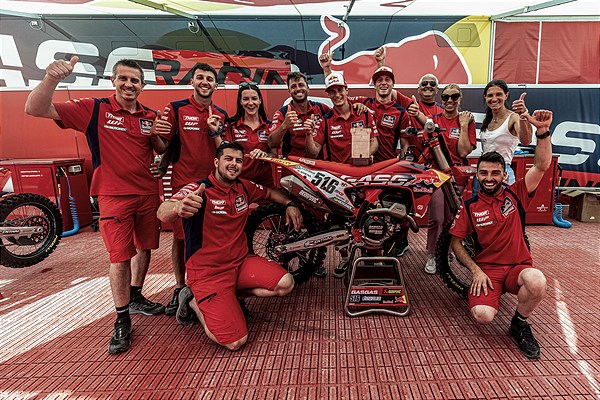 Thousands of passionate Spanish fans travelled from far and wide to round nine of the 2022 FIM Motocross World Championship to get a glimpse of Jorge Prado in action on his MC 450F. Cameras were following ’61‘ wherever he went within the Intu Xanadu – Arroyomolinos facility and he gave the fans a lot to cheer about, as did his Red Bull GASGAS Factory Racing teammate in the MX2 division. Simon Langenfelder ripped to his second podium finish of the season!

Reminding pundits of his exciting potential, Simon Langenfelder jumped back onto the MX2 podium at the Grand Prix of Spain. Langenfelder achieved the result via some impressive charges from the lower half of the top ten – he went from sixth to second in moto one and set the fastest lap of the race along the way! ‚516‘ was equally as impressive in moto two; he moved forward to take third in the moto and second overall at the Grand Prix. Such an impressive showing helped him maintain third in the championship standings too.

Simon Langenfelder: „It was a really good round for me! I had a good jump out of the gate in the first race, but messed up the first two corners a little bit. I made some passes to finish second. I had a good start in the second race; I could not really get a rhythm, but still took third. I am really happy to be back on the podium and to be heading in such a good direction.“

The Grand Prix erupted as Prado took the holeshot in the first moto, although some very small errors during the opening laps caused him to drop down to third. ’61‘ then spent the rest of the moto shadowing the riders ahead; he set some of the quickest times of the race whilst trying to slash the deficit. Third was where he was eventually ranked in the moto, which set him up for success entering the second stint. Prado took control of the early lead, thanks to another holeshot, in the second moto, but an uncharacteristic mistake pushed him back to eleventh at the checkered flag. 2-11 scores left him in fifth overall, just a couple of points from a podium finish. Fourth is still where he sits in the championship standings.

Mattia Guadagnini continued to show some amazing potential in just his second competitive appearance on his MC 450F. Qualifying in fourth was a great boost for the flamboyant star. Unfortunately, a mediocre start stopped him from repeating that success in moto one. Starting in thirteenth, he eventually moved into eighth by the time that the checkered flag waved. The second moto was another incredible example of his potential; he raced inside of the top five and eventually claimed a career-best ranking of fifth for sixth overall at the Grand Prix of Spain.

Jorge Prado: „I was feeling very good on track this weekend and I had the speed to go for the win today. I was pulling away in that second moto and riding like I do in training – I was just riding comfortably. I lost the front though and had quite a big crash. It was a shame that I crashed; I could have made some good points today. We just need to focus on the next round now.“

Mattia Guadagnini: „I am really, really happy about how things are going now. This event started really well for me. Finishing fourth in the qualifying race was really good motivation – it gave me some confidence. I think that I could have got a similar result in the second race, because I was feeling really good, but I did not want to make a mistake. Finishing top five in MXGP after just two races is really, really good. I am so happy about how I feel on my MC 450F.“

Red Bull GASGAS Factory Racing will travel north to the hard-pack hillside of Ernee, France, now. The Grand Prix of France will act as round ten of the 2022 FIM Motocross World Championship.