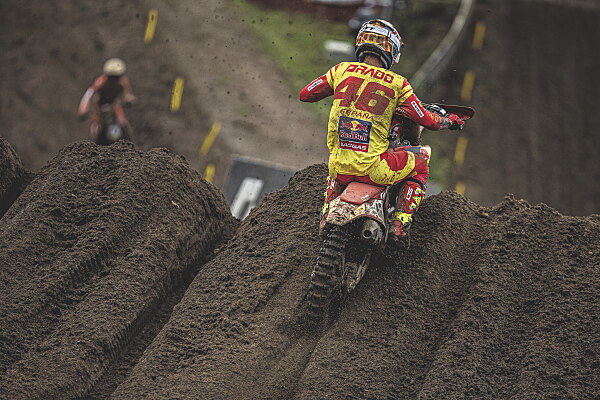 IMPRESSIVE RIDES FROM GASGAS FACTORY RACING RIDERS AT THE MXON.

The Motocross of Nations never disappoints and the seventy-fifth edition, which was held at RedBud earlier today, was certainly no different! Even regular rain showers couldn’t silence the crowd, who hung over the fences from the start of the weekend to the very end. The Red Bull GASGAS Factory Racing team had all of their stars in action; Jorge Prado (Spain), Mattia Guadagnini (Italy) and Simon Langenfelder (Germany) impressed at different points.

Returning to the RedBud circuit where he has had success in the past, Prado was immediately comfortable on his MC 450F and set the fastest time in his practice session. Prado’s first moto in Spanish colors was very consistent – he started in sixth and finished in the same position on a track that’d been hammered by rain. Again battling at the front of the pack in the final moto, he hit the checkered flag in seventh and got fourth in the MXGP overall classification. Prado led Team Spain to their best result in fifteen years, sixth, too!

Jorge Prado: „I had a solid day at RedBud! It is always great to race here with such amazing fans. I took sixth with Team Spain and I am happy with that, as we are a very young team and I know that we will improve. I will keep dreaming of a podium with my country. Thanks to everyone for the support!“

Mattia Guadagnini was a fan favourite as soon as he touched down in the USA and the way that he rode in his first moto only helped that! Using all of the power in his MC 450F, he ripped into the early lead and was at the front for almost half of the race. Guadagnini eventually took third, which ended up being Italy’s greatest result. Unfortunately, crashes hindered him in the third moto and he could only salvage a nineteenth. 3-19 scores left him in sixth in the Open overall classification, but he was certainly capable of so much more. Italy took fourth in the overall classification.

Like Guadagnini, Simon Langenfelder was racing at the Motocross of Nations for just the second time in his young career. Langenfelder was charging early in moto one when he made a mistake, but he was not to be deterred and went from twenty-eighth to seventeenth. There was a lot more work to be done in the second moto; Langenfelder fell in turn one and had plenty of ground to make up in the rain. Amazingly, he got on the gas and charged all of the way to eleventh at the checkered flag! Not only did that leave him fifth in the MX2 overall classification, but it was also Team Germany’s best result. Germany finished eighth.

Mattia Guadagnini: „The first race was unbelievable. I took the holeshot and led for half of the race before finishing third. I was so, so happy. I made a really big mistake in the final moto and crashed on the start. I crashed another time too, so it was not the best race. I was not riding that good either. I am really happy about my first race though.“

Simon Langenfelder: „It was an okay weekend. I had some bad luck with my starts, so I had to fight a lot to get to the front. It was not easy! I had a good second race, for sure, as I took eleventh after getting caught up in a crash at the start. I came from quite far back. I am happy with my weekend! It was just cool to race here on my MC 250F.“