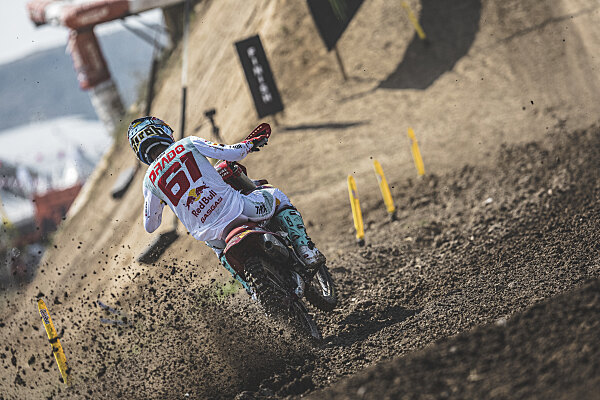 Following a successful campaign in the 2022 FIM Motocross World Championship, Red Bull GASGAS Factory Racing is set to tackle the prestigious Motocross of Nations this weekend. Jorge Prado (Team Spain), Mattia Guadagnini (Team Italy) and Simon Langenfelder (Team Germany) will get on the gas at the incredible track of RedBud in the United States.

Jorge Prado will race his MC 450F in the MXGP division for Team Spain. Representing his nation for the fifth time, he is keen to carry the squad to a podium finish for the first time in the history of the event. Prado is coming off of a strong year in the FIM Motocross World Championship – he secured a bronze medal in the final championship standings and climbed onto the podium at ten of the eighteen rounds.

For Mattia Guadagnini, Jorge Prado’s teammate under the Red Bull GASGAS Factory Racing tent, competing at the Motocross of Nations as a defending champion will be an incredible experience. Guadagnini was the MX2 rider for Team Italy when they clinched gold one year ago, but will race his MC 450F in the Open class this time around. The number three will be attached to his machine.

Jorge Prado: „I have been training hard to prepare for the Motocross of Nations. I am really looking forward to returning to RedBud, as I had a good time when we last raced there. I’m excited to see all of the fans around the circuit! The MXoN is very special.“

Mattia Guadagnini: „This will be my second time representing Team Italy. It is such an honour to represent my nation. It is going to be such a special weekend. We are really motivated to take a good result at RedBud, which is a track that I have dreamed of racing on! We are the defending champions and that is extra motivation.“
Simon Langenfelder: „I am very excited about the Motocross of Nations! I love spending time in the USA and everyone says that RedBud is an amazing track. I just hope that the weather is okay. I am looking forward to representing Germany again. It is very special and something that I always dreamed about.“

The Motocross of Nations starts with media activities on Friday, September 23, and then qualifying happens on Saturday. The three motos that count for points will be run on Sunday, September 25. Make sure that you follow the GASGAS channels across the weekend!