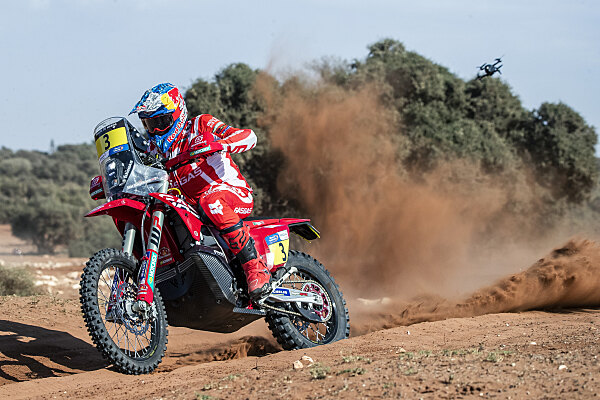 2022 FIM WORLD RALLY-RAID CHAMPIONSHIP LEADER KICKS THINGS OFF WITH FIFTH ON STAGE ONE.

GASGAS Factory Racing’s Sam Sunderland has got his 2022 Rallye du Maroc off to a strong start by completing the technical opening stage with the fifth-fastest time. With high speeds, mixed terrain, and plenty of navigation on the menu throughout stage one in Morocco, it was a seriously tough test, but for the reigning Dakar champ, it proved to be a productive day in the office.

Sam Sunderland:“That’s stage one in the books! It was a good but challenging day for me. Lots of navigation, mixed terrain, and even a 30-kilometer section on a beach, which was pretty fast! Towards the end it was a bit of a struggle. I hurt my wrist in a small crash last week and near the end it was a bit sore, so I had to back off my pace a little. But overall, I’m happy and fifth is a good start to the race, I’m looking forward to tomorrow.”

It’s been a while since a full line-up of the best rally racers in the world were in action, and stage one at the Rallye du Maroc served as a reminder to just how technical, and physical, rally racing really is. As the 16th rider to enter the 316-kilometer special, Sam was on the pace from the start and quickly began working his way up the overall leaderboard.

Enjoying the mixed terrain in the early going, as well as a wide open 30-kilometer sprint down a beach, the reigning Dakar champ showed stage-winning pace. After holding down third place for much of the special, the Brit was frustratingly forced to slow his pace a little due to a little discomfort following a crash during testing prior to the event. Sam nevertheless held strong for a solid fifth-place finish.

With today’s over three-hour long stage complete, Sam will now focus on Monday’s stage two. A winding 315-kilometer special from Tan-Tan to Laâyoune, the terrain is expected to mirror the conditions found stage one. Another tough day at the office is guaranteed.