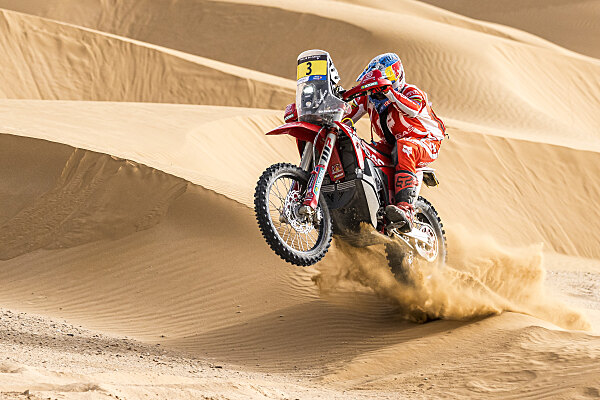 Doing exactly what’s needed to remain in contention for victory at Rallye du Maroc, Sam Sunderland has placed seventh on stage two despite losing a little time locating a troublesome WPC. Keeping his cool after successfully validating the waypoint, Sam upped his pace to make up for lost time, eventually bringing his RX 450F home in a strong position. Now seventh overall in the provisional standings, the times at the top remain close with three stages remaining.

Sam Sunderland:“Today was another tough one with the terrain and also the navigation. Early on in the stage I took a little bit too long to get going but at refueling I had a bit of a reset and then I felt strong to the finish. One WPC was really difficult to find in the off-piste, which was a little frustrating, but it’s the same for everyone and tomorrow’s another day.”

Stage two at Rallye du Maroc proved to be a frustrating one for our rally ace. But knowing just how vital staying calm and remaining focused can be, once Sam had validated a troublesome checkpoint it was full gas the finish.

And it was Sunderland’s high pace that secured the seventh-fastest time on stage two to reduce his deficit to the rally leader, despite slipping to seventh in the provisional standings. Now sitting just over seven minutes adrift of the lead with three stages remaining, not to mention having a favorable starting position for tomorrow’s stage three, Sam is just getting warmed up!