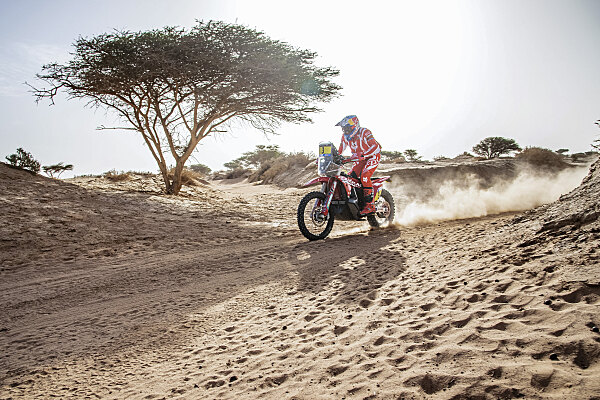 And that’s a wrap on Rallye du Maroc 2022! For GASGAS Factory Racing’s Sam Sunderland, it wasn’t quite the result the current FIM World Rally-Raid Championship leader was looking for, but fifth overall in what was a seriously competitive line-up was a strong finish nevertheless. More importantly, Sam extended his championship lead to 22 points with just one round to go – the Andalucia Rally later this month.

Sam Sunderland:“That’s the Rallye du Maroc done for another year. It’s been a tough one and I haven’t been at my best this week. But day by day I improved and with some small changes to the bike things got better as the race went on. All week there were some tricky navigation points and today was no exception. Seven kilometers in and quite a few of us couldn’t validate it and then we were all just riding in dust which made us all slow our pace. It was frustrating but all in all, I’m happy and I didn’t try to force the issue or take any risks. Fifth is good for the championship and now it’s on to Andalucia in a couple of weeks.”

The downside to Sam’s impressive runner-up finish on yesterday’s special was that he was the second rider into today’s fifth and final stage. After making a quick start, a troublesome waypoint early on allowed many of his chasing competitors to catch him up. With a group of riders formed, Sam kept his cool despite the frustration of riding through dust for the remainder of the day.

Knowing that any chance of lifting the 2022 FIM Rally-Raid World Championship in Morocco had gone, Sunderland maintained a solid pace to safely bring himself and his trusty RX 450F home to secure fifth overall and in doing so, further extend his lead at the top of the standings to 22 points. And now, with just one round to go, all Sam needs is a 13th place finish or better at the Andalucia Rally to be crowned world champion. Bring it on!